Candace Parker on the humidity in Florida

Dude…. moral of the story ITS HOT AS Hades out here!!!! Swipe ➡️to hear my Florida heat story

The Beard has arrived! 🛬 pic.twitter.com/WrTZMclEDh

Austin Rivers on confidence in Rockets: 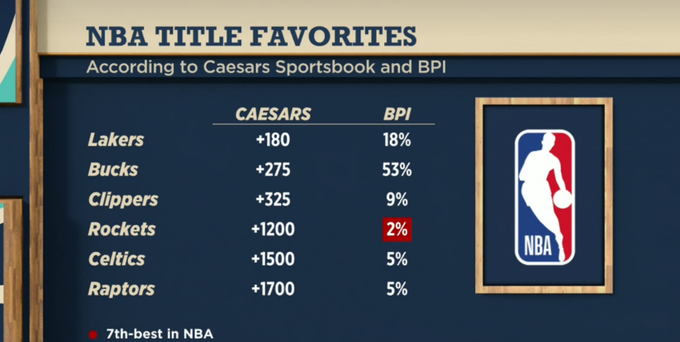 “I have to agree with Austin. But I feel like this is gonna be a shootout. The best team, the best condition and the team that can find that rhythm to be able to play together” – Pippen

“I would put it at 5 to 6 teams. Boston, Milwaukee, Denver, Houston. Lakers and Clippers. But he’s right. They should go in there with that confidence. The one thing that I’m very curious about is the different courts that they’re gonna play at. There’s depth perception now. I know they practice in a gym, but it’s not the same competitiveness, it’s not the same kind of view. I’m curious to see if they can shoot the ball really really well in some of these unique gyms that these guys are going to be playing in for the first time, then I think the Rockets can really do something” – Jefferson

Jokic cleared from quarantine in Orlando 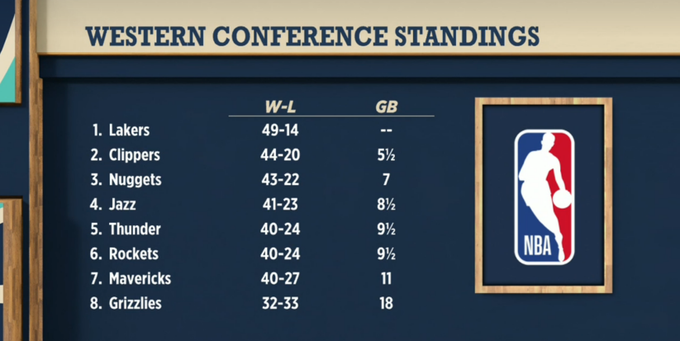 “I don’t think he’s going to surprise everyone. There are expectations on him. What he is showing everyone is a commitment to his craft. If anybody were to tell you at in the preseason that Jokic would be an MVP, no one would be surprised” – Jefferson

“This kid can’t surprised us about anything. He’s probably as versatile as any player in the game, which we’re not used to saying that about a big guy” – Pippen

Dinwiddie gives advice to players in the bubble (Via Taylor Rooks/Bleacher Report):

Using hotline OK or not OK?

“I’m OK with it. I don’t think that players are going to be sort of calling each other out. They want to make sure that everybody is safe. One outbreak could cost them the whole season and there’s a lot of riding on this. If you see something, report it” – Pippen

“This is not the block, this is not the hood, this is a serious medical situation. If you go and do something that you’re not supposed to do, you’re putting other people’s lives at risk. The message needs to be: Don’t do it. If you’re going to be there, go there and abide by the rules” – Jefferson

This kid took drag the pivot foot to a whole nother level using his heelys for the bucket:

Victor Oladipo on decision to play or sit out:

Oladipo: “Possibility that I could play”

“I don’t ever question someone’s injury. But I’m confused because he played in NBA games and no one got five on five before they got down into Orlando. He’s not dealing with anything other players are dealing with. If he’s there, then he should play with his team. If there’s other things that we don’t know about, then we just have to wait for him to decide what’s best for him” – Jefferson

“He’s probably lost a little bit of the training, therapy and the push that he would have probably went through had he had these last three or four months to really test him. It’s fallen off a little bit. He doesn’t know if he is quite ready” – Pippen

2007 – A young Kevin Durant with the catch and shoot three point bank shot to beat the shot clock buzzer in NBA Summer League!

“My family and I are pledging the rest of my salary to really keep this movement going. We feel like this could benefit the black communities in LA, New Orleans and Indiana, where we have ties there, This would be the perfect time to do that” – Holiday

“It was really about figuring out when it came down to coming back to play and what was part of that motivation and part of it was coming back and winning and making this push because before all this happened, we felt like we had that 8th spot. We had the momentum, the drive, mentally I feel like were locked in. Coming back with everything happening, I needed an extra push. My wife said to pledge the rest of my salary. When she said that it was kind of like, ‘Damn woman. You’re a genius.’ There’s people out there that need support and support from us who still have jobs and have been blessed with so much and just giving back to the community” – Holiday

“I think were going to do great. Even though we’ve had a little bit of a break, I feel like everybody mentally and physically stayed in shape as best as we could. I feel like we have a really good chance” – Holiday

On what the Pelicans need to go to the next level:

“The chemistry really started to build. I think time for us was something that was that wasn’t necessarily on our side. There’s going to be a couple guys who are definitely going to need to step up just a little bit more, especially Zion who I feel like has a bullet on his back and a lot of pressure and he’s built for it. Zo (Lonzo Ball) is one of those players that people sleep on. His vision on the court, the way he plays defensively and offensively, I feel like he’s so equally good. But he’s not really flashy” – Holiday

Reaction to the play-in game? 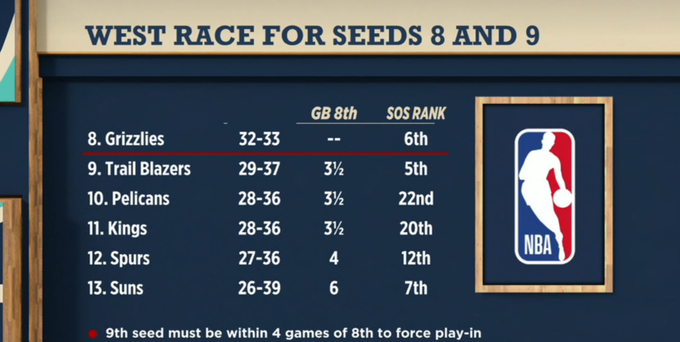 “Just like we had that confidence before this pandemic, we have that confidence now. We’ve been locked into practice. We came here for one reason and that’s to win” – Holiday

Able to spend time with brothers Justin & Aaron in Orlando?

“I’m facetiming with them all the time. I’m trying to figure out ways to get there without getting in trouble” – Holiday

Jimmy Butler on no name or message on back of jersey:

Who can be trusted to score for Miami besides Butler? 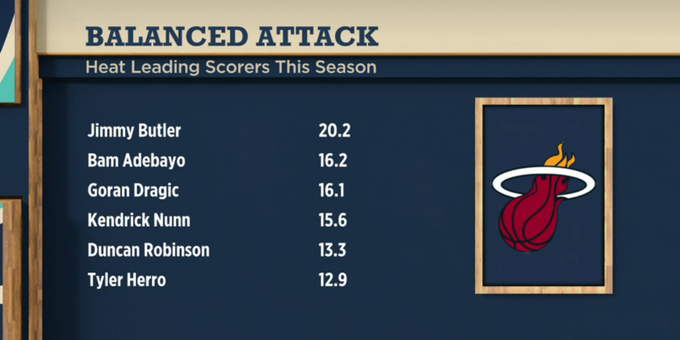 “Bam Adebayo just because of the way he’s just developed his game on a number of different fronts. But I would give Goran Dragic that nod because he’s their number one guy off the bench, their sixth man and also Tyler Herro. He has the third most fourth quarter points for the Heat this season behind Butler and Dragic” – Sedano

“Bam Adebayo. He really came out this season and proved that he’s the second best player on this team. What he’s been doing on the defensive end, he’s been an anchor for them on that end” – Pippen

“My thing about this Miami Heat team is that they are super talented, they are very very deep, I love their versatility and I love their youth. Do I think that they can make it to a conference finals? Yes. Do I think that they would be a super sleeper for the NBA finals? There is no way that this team has enough to win a championship. It’s not a reality. Boston, Milwaukee, Lakers and Clippers have better teams. When their young players have developed, then I could put them in the one or two category or the ability to win a championship. But this year, even with Jimmy Butler’s leadership and the growth of their young players, they’re either one legit scorer away or the development of two to three of those younger players to get to that next tier” – Jefferson

Heat ready to challenge best in East this season?

“I think this is the season for them, based on how the teams are constructed in the East. They’re constructed well enough to be able to compete with the Milwaukee Bucks because they have players on that team who has an answer for for a guy like Giannis Antetokounmpo” – Pippen

“Miami is way ahead of schedule. They’re not fearful of any team in the East. They look at a team like the Bucks where they’ve had a lot of success, at least in the regular season, against them. They’ve defended Giannis as well as anyone, Bam specifically. Giannis is only shooting 35 percent in 23 attempts against Bam. Adebayo. They have guys that they can throw at Giannis particularly. They feel confident regardless of who they face, they have the depth and they’ve got the continuity to make this thing work and potentially get through the East” – Sedano

“Bam Adebayo has that great leadership, star quality for a young guy and he’s the kind of guy that other teammates want to play for. The chemistry there is great and I feel like these guys are particularly going to thrive in the bubble” – Nichols

Hassan Whiteside brags about his cooking skills (Via HassanWhiteside/IG)

“I’m the king of the world”
Which movie scene would you recreate in Orlando?

Nets players recreating the famous scene from “Titanic” out on the water while they were fishing:

looks like @BrynjForbes and @RudyGay have created a new sport in the bubble 🏈⚽️😂 pic.twitter.com/WAIS8OnhML

Look who I find in the bubble pic.twitter.com/umk6rpyHUP

Shaq being Shaq
What do you expect next from Shaq?

You never know what good samaritan will show up in your time of need. Thank you @shaq for your service #LawEnforcement pic.twitter.com/q3j0KImifu

“He should be a politician. He certainly brings us all together, he has the heart and mind for it. Vote Shaq in 2020!” – Sedano

“This is not evasive enough. The information is always going to be changing. This is going to continue to evolve. I’m okay with it and hopefully the players are because it’s about their safety” – Jefferson

“This is gonna continue to be a process from day to day. Overall, I hope everyone is safe there” – Pippen

“There’s a reason they call it practicing medicine. Not all of this is full proof, not all of is stuff that we know right out of the gate and we have to test these things to make sure they work. If it’s all about safety, I’m all about it” – Sedano