The NBA is back!

So the NBA's inviting 22 teams to Orlando: 13 Western Conference, 9 Eastern Conference. Eight-regular season games per team. Play-in for the 8th seeds. July 31-October 12. Vote tomorrow to ratify.
The NBA's back. 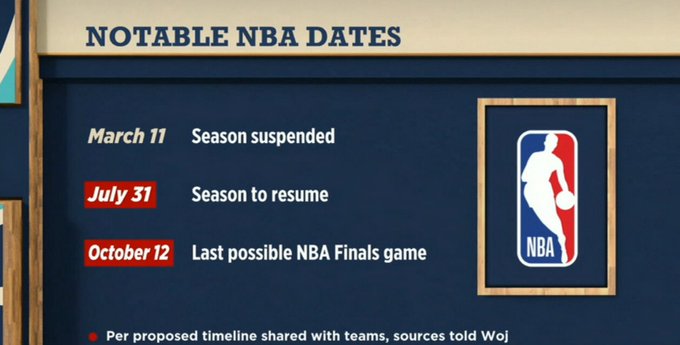 There will be an abundance of testing. But social distancing rules still apply. https://t.co/Kuiex73gSo

“This is a good moment. I want to prepare the fans of all these teams for this: The more details that you’re going to hear, the possibility that you’re gonna be upset is gonna grow because this is just not gonna be fair. But let’s not forget why we’re doing all this: For safety. We’re gonna have to get a lot of answers about the protocol. It has to do with how often you get testing. What do you do when you’re in the bubble? How safe can you be in your hotel?” – Windhorst

“These are all things that you’re going to have to deal with. The bigger picture is that we got basketball back and things will not be fair” – Ogwumike

“Their liberties are going to limited here. A lot of adjustments are gonna have to be made” – Windhorst

On the events in the USA:

“This really is painful to see. This is now becoming a conversation. But we have to keep going because there is a problem. This pandemic is racism” – Ujiri

Ujiri: The NBA’s leaders “Have to speak. And specifically white leaders”

“Racism is real. Let’s talk about it now and that’s the difficult part” – Ujiri

Experiences with racism during NBA Finals:

“When he physically stopped me, I honestly did not think racism at the time. This is totally irrelevant now. We have to teach humanity. Can you imagine how many people go through this? Now it’s time for all races to speak and speak to each other because if we don’t, this cycle will continue. Everybody needs to step up” – Ujiri

Ujiri on NBA returning: “We all have to compromise”

“I’m excited. Sports unites people and brings people together and makes us happy. Adam [Silver] has done an incredible job of just going through the process” – Ujiri

1992 – Michael Jordan knocking down his sixth three-pointer…in the FIRST HALF! Then gives the shrug afterward! 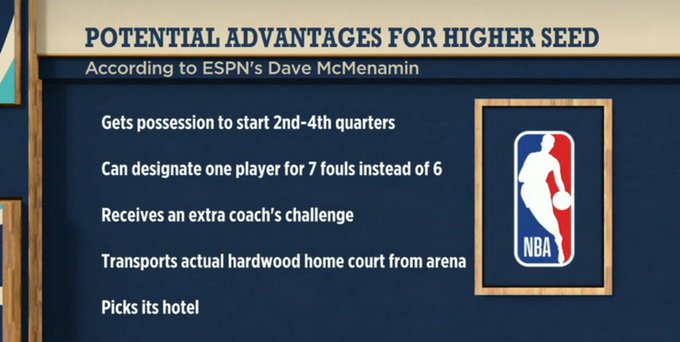 Extra possessions ? Lol either you the Either you good enough to win or you not. The end https://t.co/IFacN7kN2F

How can home-court advantage be replaced?

“If we’re going to compete for a championship, where we’ve really risked a lot to get there. you want to win. I would take any advantage that pertains to the game specifically” – Ogwumike

“None of these are happening. No. 1 priority is safety” – Windhorst