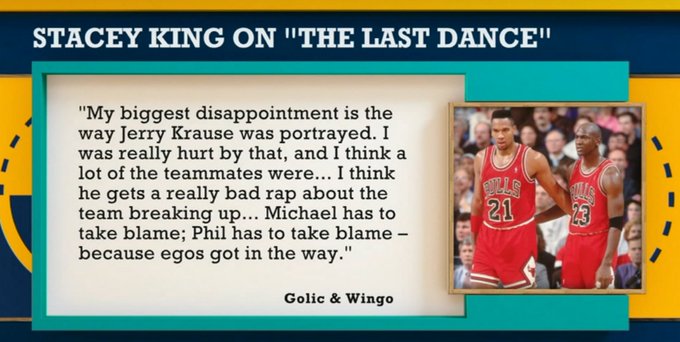 Fair for some former players to be upset with how they were portrayed in the documentary?

“Absolutely. This documentary made MJ look like a superhero and everyone and it made everybody else look like a villain. Michael Jordan broke every player code imaginable. He didn’t have to tear down other people to get to praise your greatness because it speaks volumes for itself” – Perkins

“I’ve talked to a bunch of these guys that were part of this documentary and when they heard this, they were thinking, ‘Oh. It’s about our team.’ But it was actually about one of the most compelling athletes who ever lived. Some of them felt duped right from the get go. As for Horace being the source of ‘Jordan Rules,’ there was more than one source” – MacMullan

How many MVPs should MJ really have?

“He got the 5 MVPs that he deserved” – Perkins

“Now they’re actually on the floor working. This gives them hope” – Rivers

“I would not because I think by the time we do that, we have probably gone through every scenario, and I feel like they would make us safe. But if I didn’t, I would tell you, and I would tell them. And I think it’s okay for anyone who is uncomfortable, I hope they come forward and say that they’re uncomfortable. I think that will be okay, and I think we can still have the league and have our games with a few people being uncomfortable” – Rivers

Frustration with stoppage now that Clippers are favorites?

“It may be anxiety because we do believe that were really good and have a great shot at it. I keep saying that it’s delayed, not denied” – Rivers

Doc on first meeting with team after Donald Sterling tapes were made public:

Doc on going from friends to rivals with MJ:

“I haven’t gotten over the 1993 Eastern Conference Finals series vs the Bulls. I have never recovered from it. It was a hard series because I was convinced we were the better team and when you find out you’re not, that’s really hard. For me to admit that took years”

“It is and it isn’t. I have a hard time leaving Kevin McHale off. He was Bird’s Pippen. Sam Jones is a victim of recency bias” – MacMullan

“Lakers. Because of LeBron James. Him getting more rest is just more dangerous for the league” – Perkins

“Bucks. Giannis is desperate for a win. Mike Budenholzer was there in 1999 [lockout season] as an assistant with the Spurs. He knows what it takes on how to get your team back up and running” – MacMullan