1997 – Greg Ostertag blocking Shaq on one end, then John Stockton dishing it to Karl Malone on the other end for the one-handed jam!

2008 – LeBron James with the monster one-handed jam on the Celtics!

2012 – Kobe Bryant faking the pass and finishing with the tough left-handed layup vs the Nuggets!

“Teammates were afraid of him”

“I don’t know if they were afraid. People hadn’t seen the level and intensity that those teams were able to bring. Michael Jordan didn’t need to have the discipline to practice that hard, but he did. There was no if, ands or buts. Either you were all the way in or you’re all the way out and he wanted to make sure that and we all understood that” – Armstrong

Difference in MJ after 1993 championship?

“The day-to-day pressure of living up to that standard of excellence eventually weighs on you. It worn on all of us. Watching him behind the scenes of just answering the same questions day in and day out that it just wears on you. He had the ability to block things out, but that was one thing that he wasn’t able to block out at that time because there was a lot of pressure, a lot of things going on not only on the court but off the court as well” – Armstrong

On how the atmosphere changed post-Jordan and Pippen leading the team:

“When Scottie evolved, it was fabulous to see because really he had an opportunity to really blossom. He was hands down our best player. You really got a chance to see how special a player he really was” – Armstrong

Memories of Pippen sitting out final play in 1994 playoff game?

“It was definitely a difficult moment and it could have been one of those moments that we could have went either right or left. But Bill Cartwright’s leadership kept us right on track” – Armstrong

B.J. on his role in bringing MJ back from retirement:

B.J. on facing MJ in playoffs with Hornets:

“I knew exactly what I was doing. I knew exactly what was going on. Sometimes you get caught in the moment. When you’re in the moment you always feel you have a chance, so I wanted to make our statement, we wanted to make our statement, and that was a big win for us, but he made the adjustment and he won the series, but for one day I can definitely live about it and talk about it”

On this date last year:

How did Kawhi’s shot change the landscape of the NBA?

The game was tied at 90 apiece at the time

“The landscape was already changed way before that shot. It was changed when the Raptors acquired him. They took a risk and it ended up working out. They’re going to be talked about for the rest of their lives” – Perkins

“In the moment, he knew how big of a moment that was for him and everybody involved with him. It could have changed history. This game was going to be won by the Raptors in OT anyway and we would end up with the same champion not to take away from the moment” – Windhorst

On this date in 1985: New York Knicks win draft lottery!

They would go on to select Patrick Ewing:

Who needs No. 1 pick the most? 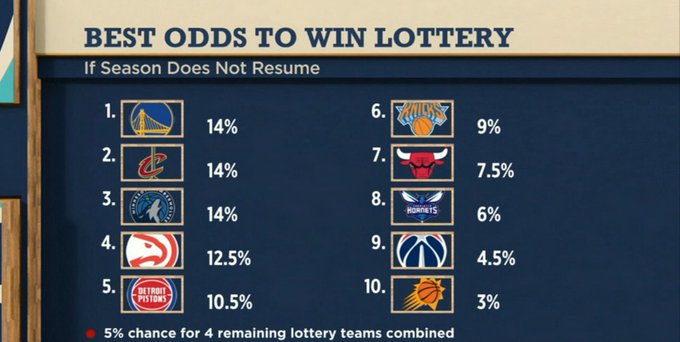 “The Cavs and Warriors. Both teams need big men [like James Wiseman] and this is light on big men, heavy on guards in this draft. If you’re the Knicks, a team who needs guards, you can be okay getting that third or fourth pick” – Windhorst

“New York Knicks. They’re looking for a star and they can draft one in LaMelo Ball, who’s a star in the making” – Perkins

China’s CCTV says it has no intention of resuming airing NBA games, per Brian Windhorst