Most iconic moment in NBA History on May 7?

“Allen Iverson. That was a classic interview that’s going to be remembered for a long time. Teams don’t even practice anymore” – Pierce

“You got to rename MJ vs Utah, Game 6 ‘The Shot’ because that was to win it all” – Pierce

“For Iverson, there had been a lot of contention between him and Larry Brown over practice and a lot of other things. There were also rumors all season about Allen getting traded, which he was very, very upset with because he felt he had been so loyal to Philadelphia” – Nichols

What will you remember most about AI’s rant?

Soundbite from the ‘Practice’ rant where he didn’t want to leave the podium:

“Just the repetition of it. I had forgotten all that” – Lowe

“For that particular season, they needed something to galvanize them and that became their tensions with Jerry Krause. Foil is the wrong word for the rest of Michael’s career because although they didn’t get along, Krause did play a role in building a team and giving Michael this sort of roster around him that can win championships. Michael would have been great regardless of who the GM was” – Lowe

“No GM is going to make a player great. He was able to build a team around MJ to take his greatness to new levels but as far as making Michael the GOAT, that’s all him. I think it has a lot to do with the coaches and the players you’re surrounding him with to make you great and a win a championship” – Pierce

Relationship between a star player and a GM:

Coach Thibs reputation help or hurt his chances of getting a new job?

He is known to play his guys lots of minutes; Willing to adapt after spending this past year learning from other coaches around the league 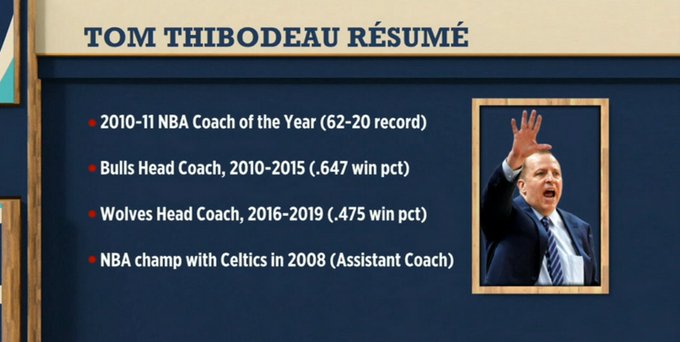 “I really do. It’s an easy fix. It’s just about adjusting your practice habits and the minutes and the time off your players need. I think those days of him running hard practices are in the past. He would be great for any organization” – Pierce

“Part of his reputation is that he wins. When you give Thibs veteran talent that is ready to win, they win. When the Minnesota thing blew, it was a popular palor game inside NBA circles and whether he’ll get another chance. And A lot of people said no. His personality and reputation wasn’t going to work to his advantage. Now he’s been connected to almost every high profile job opening in the league so clearly the winning part of his reputation has won out over the other parts” – Lowe

“Looking back on his time in Minnesota, the thing that we learned from that is: He should not be both the GM and the coach. Largely in the NBA, the GM/Coach combo doesn’t work” – Nichols

NBA to hold All-Player call on Friday, per Ramona Shelburne

Pressure mounting to save season despite hurdles?

Sources: Mike D'Antoni, who turns 69 tomorrow, has no reservations about being on the Rockets' bench if the NBA season resumes. A primary reason: Confidence that NBA commissioner Adam Silver won't allow games to be played if safety would be compromised. https://t.co/UI4vOQSRE4

“The calendar is going to supply pressure all by itself. Eventually, you’re going to reach a point in the calendar where you just have to make a decision. Most people that I’ve talked think that’s some time in the middle of June” – Lowe

“There has to be some closure and finalization. I really do think it’s going to affect the following season. I think there’s going to be a shorter season depending on when this season starts and ends” – Pierce

“Guys tolerance to risk is gonna be a factor here and I’m interested to see how players react to watching other sports start to make their decisions and how owners react because that’s really gonna be one of the biggest questions. There is no zero safety option here. There is no risk free option until there is a vaccine” – Nichols