What if MJ didn’t embrace the triangle offense?

“He would have been great without the triangle offense. In every era, the best player always won a championship. He was already an MVP before he won. It’s just coaches figuring out what’s the right system to put around your best player that’s going to help out the other guys to help him win. He was always going to be successful no matter what offense you designed around him” – Pierce

Paul and Tracy on carrying the entire load for their teams:

Did Bulls change Rodman or did Rodman change Bulls?

“I absolutely believe that he changed the Bulls. Dennis was always going to be Dennis. As long as he gave you 110% on the court, you can live with some of his off the court antics. You have to soften up for a guy who was different, a guy who wanted to be accepted, a guy who already won a championship and knew what it took. If he needed a break, you kind of backed off. That was Dennis’ form of load management back then” – Pierce

“They know when he’s on that floor and in between those lines, he’s giving 110%. But I don’t think the Bulls changed him, I think Madonna changed him as a person. Everything just went wild with Rodman after meeting Madonna in San Antonio” – T-Mac

On the Bad Boys and their style of play:

“Win championships. Our style of play was ugly and everybody thought we ruined the game, but reality says that we changed the game” – Laimbeer

MJ on Pistons: “The hate carries even to this day”

“No. We hated the Boston Celtics. Mentally strong teams, you had to get past them. It takes so much energy and so much disappointment over the years. So I understand how he feels” – Laimbeer

“I don’t know how he came out of there alive”

“As soon as he steps in the paint, hit him. This is the Jordan Rule – every time he comes to the basket, put him on the ground. How bad do you want it? Are you willing to be hit to score a basket?”

“You couldn’t let him dominate the game because he could at times. You had to make him shoot jump shots. He made some buckets, but he also hit the floor a lot. His teammates weren’t capable of, at that time, to carry the day. We knew that he had to pass the ball to them and we take our chances with them being scorers” – Laimbeer

On what he remembers from their 1991 loss to the Bulls in the Eastern Conference Finals:

“They whined and cried for a year and a half about how bad we were for the game, but more importantly, they said we were bad people. We weren’t bad people. We were just basketball players winning. And that really stuck with me because they didn’t know who we were or what we were about as individuals and our family life. But all that whining they did, I didn’t want to shake their hand. They were just whiners. They won the series. Give him credit. We got old. They got past us. But okay, move on” – Laimbeer

Regret not shaking hands after losing to Bulls [in 1991]?

The Pistons players are the only ones to have an overall winning playoff record against Larry Bird, Magic Johnson and Michael Jordan

“Why would I regret it now today? I don’t care what the media says about me. I never did. If I did, I’d be a basket case, especially back then. I was about winning basketball games and winning championships and did whatever I had to do to get the most out of my ability and our team and we did. At the end of the day, we’re called world champions” – Laimbeer

Laimbeer: Throwback Unicorn?
Made more than 200 three-pointers in his career

Will there be a WNBA season this year?

“The NBA is going to lead this not only for the basketball world, but for all sports. The NBA has a lot more 0s than we do in the WNBA” – Laimbeer

Being a bad boy:

Sleestak from the 1970s TV show, Land of the Lost: 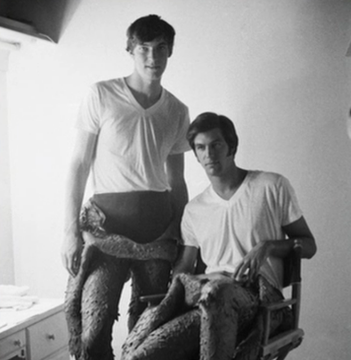 “The greatest thing was: it pays so much money! It’s embarrassing. We hardly worked and we got all kinds of money and I still get money today from residuals. It was fun, it’s a part of my past and I’m proud of it” – Laimbeer

Woj: NBA allowing teams to open practice facilities where legal on May 1

Would you feel comfortable going into a practice facility?

“Absolutely. I will feel comfortable as long I don’t have to run into a lot of people and shake hands” – T-Mac

“As long as you keep it under control and it’s not a huge group, I’m fine with that” – Pierce

“It’s a good look that they returned the money. Credit to them for making the payout” – Pierce

“How do they even qualify for this? The system is broke” – T-Mac