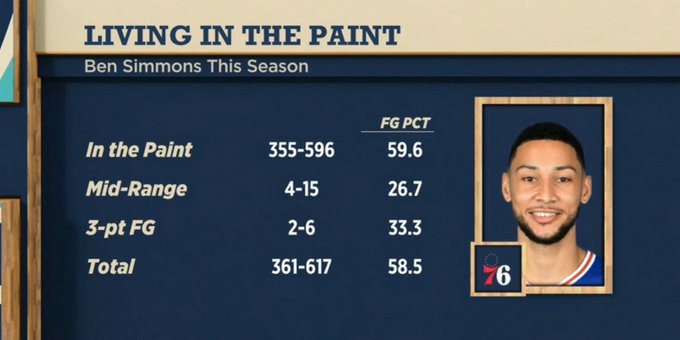 Would the Sixers have been wise to bench Simmons to get him to shoot more threes?

“No. I don’t think. Players of his caliber only come around so often, he’s already a legitimate All-Star in this league and he’s getting better. But some way some how, you’re gonna have to have to push his buttons in the shooting. This is not the way to go about it. They just got to have a man-to-man talk and ask, ‘Why aren’t you taking these shots?'” – Pierce

Would Ty Lue be a good fit for Nets? (Per Stefan Bondy/NY Daily News)

“It depends on what the other options are. Irving and Lue have proven that they can be successful together and it’s about what Ty Lue and Kyrie could come together as a compromise and figure out what’s best” – Jefferson

“Ty Lue is an absolute great fit for anybody in the league. I’m tired of the NBA recycling all these old coaches that’s been in the league for 20, 30 years. This new generation needs this new young blood, guys who have been in the NBA. You talk about a guy who has won as a player and a coach, a guy who is well-liked around the league, a guy who relates to the players. He’s a players’ coach. I like to see more and more of that across the board in the league. Are they going to be a championship caliber team if you put Ty Lue in there and add (Kevin Durant) with Kyrie Irving? Yes. Can they do it? We have yet to see. Or it has yet to happen. But a great fit all across the board, I believe” – Pierce

“T-Lue is the No. 1 young coach in the NBA. He has a proven track record. Do I think T-Lue can coach this team? Do I think he can be successful? Yes. But I can’t speak for Kyrie” – Jefferson

2007 – Jump Analyst and Hall of Famer, Tracy McGrady in Game 1 of the first round going off for 16 points in the 3rd quarter vs the Jazz in a win!

2011 – LeBron James goes behind his back and dishes it to Dwyane Wade for the jam vs the Sixers!

“One of the reasons we all kind of agreed, even though it was Michael’s decision to let the cameras behind the scenes, to it is because we knew we were in the middle of this historic run and we thought it was going to be really cool one day to look back on it and it’s amazing. A lot of stuff I have forgotten about” – Kerr

How would social media have changed MJ’s legacy?

How good was Scottie Pippen?

“He was the best defensive player in the league by far. He was the counter balance to our team. He was the one who made us all feel comfortable and confident. He was beloved on that team” – Kerr

“No, not at all. We felt his frustration with him. He probably should have been the 2nd highest paid guy in the NBA or definitely top-five. So we all felt for him, nobody resented him for having that surgery. Later, we all understood, let’s give him his space, and he’s going to be there for the second stretch of the season for us” – Kerr

Kerr: “Would love to see some conclusion to this season”

Draymond on KD’s free agency: “Elephant in the room”

Via Uninterrupted’s WRTS after party/IG:

“Draymond couldn’t be any more wrong. Kevin Durant had the right and the ability to explore free agency and make a decision. I think it’s wrong [of Draymond] and unfair for how free agency should be handled by players that are in their free agency year” – Jefferson

“Kevin Durant can make his decision whenever he wants to. But I can see why Draymond can be a little bit aggravated because he knows at the end of the day that Durant’s decision really plays a part on what the Warriors would have did with him. If KD said he was coming back, that means they’re gonna sign him to a max contract which affects Klay [Thompson] and maybe/or Draymond in their contract situation. Money had a lot to do with this at the end of the day” – Pierce

“The question I want to know is: If Kevin Durant chose to re-sign with the Warriors, would that have left Draymond on the outside looking in on contract situations and knowing that they have to sign Klay and Steph coming up?” – Pierce

“When you put the rest of your team in that position to exercise that right that KD absolutely had, it is going to create a ripple effect of conflict, especially when you do it year after year. The other players would feel as if they were constantly auditioning for Kevin Durant [for him to stay]” – Nichols

Richard followed that up with:

“The reason why they were auditioning for KD is because KD was the key to them being a dynasty. That’s why put so much pressure on him and their team trying to make sure that he was happy”