Opener: A look back at the very first Jump!

Favorite moment from “The Last Dance” so far?

“After the 1st episode, I turned it off not thinking it was another one came on so I had to go online and watch the second episode the next day” – T-Mac

“The first thing that really stuck out to me: I was almost a part of that in 1997 when Jerry Krause [former Bulls GM] wanted to trade Scottie Pippen. For me, I had like a personal connection because he tried to trade Scottie for me on draft night. He was real serious about it” – T-Mac

“Michael Jordan has been angry at Jerry Krause for 25 or 30 years and he is letting him have it full bore in this documentary and will see more of it and I was aware of it at the time. A lot of this stuff wasn’t a secret” – Windhorst

“My head moved back a little bit when he talked about him going from ‘Mike Jordan’ to Michael Jordan after hitting that shot to win the national title at North Carolina. I’ve often wondered where did his leadership and his drive to win blossom? Where did it come from? Him describing that in one sentence illustrates how he was able to come into the NBA with so much confidence” – Windhorst

1995 – Michael Jordan soaring high for the monster one-handed alley-oop jam vs the Pistons!

1999 – Vince Carter with the posterization dunk on Dikembe Mutombo

1999 – Kobe Bryant with the monster one-handed putback dunk vs the Warriors!

Saving this season worth jeopardizing next season?

Rachel Nichols to Adam Silver after Board of Governors Meeting:

Adam Silver on saving the season: “Everything is on the table” 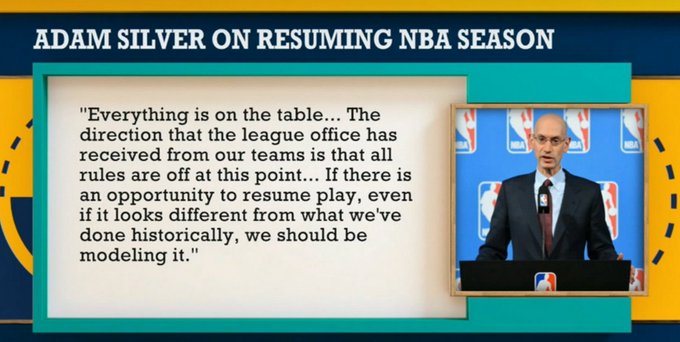 How “The Last Dance” was made possible by Ramona Shelburne

Also on this date in NBA History, a game for the ages as Celtics legend, Larry Bird once said, “God disguised as Michael Jordan”

“LeBron felt he was challenging Jordan. They were kind of on the same wave length. Maybe LeBron smelling it, Jordan smelled a little bit too. If that’s what it took to get us this series, I’m glad it happened” – Windhorst

Spencer Dinwiddie plans to play for Nigerian National team, per Shams Charania (The Athletic)
Dinwiddie was not among the 44 players named as finalists for the now 2021 Summer Olympics in Tokyo for the Americans

Will Team USA regret their decision to not invite him?

“Team USA will have good depth. He can be a free agent next summer. I’m little bit surprised that he’s saying he’s gonna go maybe play for Nigeria and not worry about his free agency first” – Windhorst

“I see him being a guy that makes calculated moves. This is a unique opportunity and I’m happy for him” – T-Mac

Jimmy Butler sends hoops to Heat teammates’ homes, per the Miami Herald
Butler & Goran Dragic were the only Heat players to have hoops!

Surprised on how many NBA players don’t have home hoops?

“No. Not at all. Most of the young guys don’t have kids and that is a reason to have a basketball goal out in the front yard” – T-Mac

You’re offered $5 million to score against Michael Jordan 1-on-1. You’re given 10 chances. This is prime MJ.

If you fail, you won't be able to hear music ever again.

Would you lace up? pic.twitter.com/DdcT9g40KG

“I am definitely gonna score. And I’m not gonna score one goal, I’m going to score a lot of points” – T-Mac