“Absolutely. This is the future” – Perkins

Where does the MVP race stand today? 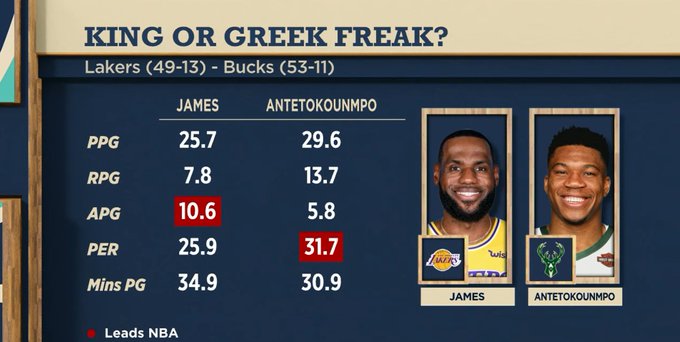 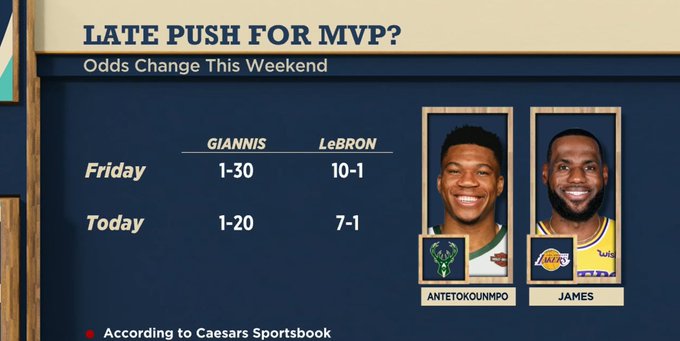 “This is no disrespect to Giannis, I’m going with King James, or should I say ‘Washed King.’ He’s playing some of the best basketball I’ve seen him play. He took on the challenge and he destroyed both Giannis and Kawhi and showed them that he’s still the best player in the world” – Perkins

“MVP is about more than stats. In an age where analytics has become so important, and rightly so, we have leaned on stats more and more every year that we have gone through and voted for MVP” – Nichols

“If it’s a tie, the tie should go to the better basketball player. Giannis is an incredible basketball player, but he can’t do the things to manipulate a defense the way LeBron can” – McMenamin

“They are the title favorites. LeBron and AD dominated. They are peaking at the right time and their role players are being stars in their role” – Perkins

“It’s clear that the Lakers, Clippers and Bucks, and that is being respectful to the defending champions [Raptors] who I think are also making a case to be there right at the end in the East, are in the top class” – Nichols

OTD in 2000 – Kobe Bryant soaring high to finish the monster one-handed jam on the Warriors!

Did you know Jake Layman could do this?

Feel bad for TJ Warren getting the Luka assignment?
Over the course of the single possession, Warren fouled him three times in nearly the same spot on the floor eventually fouling him out of the game!

“You got to call for a double team. I think TJ’s pride was in the way. It’s not going to happen with Luka” – Perkins

Is Vince the wisest in handling ankle-breaking situations?

“He’s come of age in the social media generation. He knows how to make moments and he also knows how to avoid moments” – McMenamin

Over the weekend, the following occurred:
-Pelicans beat Timberwolves
-Suns beat Bucks (Who were playing without Giannis)
-Spurs lost to the Cavs in OT
-Kings lost to the Raptors 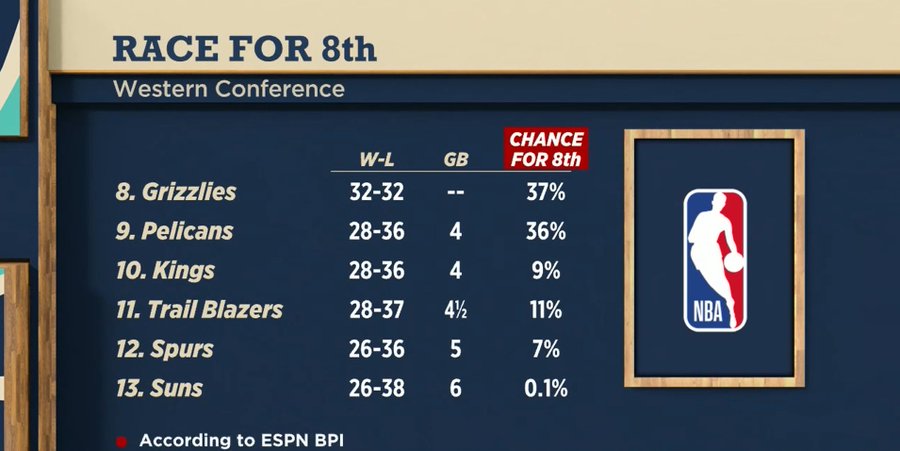 “Pelicans have the best chance, but they’re not going to catch the Grizzlies, who are playing inspiring basketball right now, they are well coached and they have a great young leader in JA Morant. Memphis is finding their stride. I don’t see a team catching them in that 8th spot” – Perkins

“I would pick New Orleans to be the biggest threat to them. But overall, I do think it’s going to be Memphis” – McMenamin

“I love JA Morant’s confidence. He is not afraid of anyone this year. To be able to have that presence of mind as a rookie and that leadership he has shown has been spectacular” – Nichols 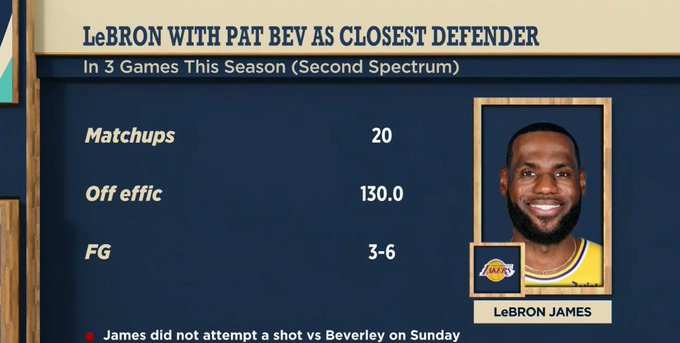 “He has it out here because literally, LeBron didn’t score on him. So there’s not really a challenge if no one scored on you” – McMenamin

“God bless his heart! You can’t be serious right now, Pat Bev. This is almost like the Draymond and Charles Barkley conversation. He don’t even believe that” – Perkins

“He is the rallying guy. This is what he is supposed to do. Can you blame him? I’m sure LeBron will have something, maybe not to say about it but to show about it later” – Andrews

“I’m just gonna roll with it and trust him” – Nichols

Why would Nets part ways with Kenny Atkinson now?
If the Nets don’t make the playoffs, they would keep their draft pick

“This reminds me of the David Blatt in Cleveland story when he was hired as a coach and was hired to build culture and coach young guys. I’m not going to believe that Kevin Durant & Kyrie Irving didn’t play a part or have a say in the departure of Kenny Atkinson” – Perkins

“It reminds me of Luke Walton’s situation with the Lakers last year where he probably could have fought and take some concessions where they had some influence on who is coaching staff was to keep that job. But he canvassing found out that Kings were going to have an offer for him and knowing that this is the right move to continue his career moving forward” – McMenamin

Who should be next coach of the Nets?

“I would not be surprised to see Ty Lue as one of those coaching candidates. They want a coach that has experience with stars, a new age coach that is going to be able to come in and be that players’ guy” – Andrews

Nets should be looking at Ty Lue!!! Kyrie had his best years playing under Head Coach TLue and they went to 3 straight finals together. He always put Kyrie in position to be successful and oh yeah he drew up a play for Kyrie that was 1 of the biggest shots in NBA History!

“T. Lue.  He’s got a resume, as far as with his coaching, that he can manage the ego of stars” – Perkins

The state of diversity and inclusion in NBA front offices by Marc J. Spears (The Undefeated) 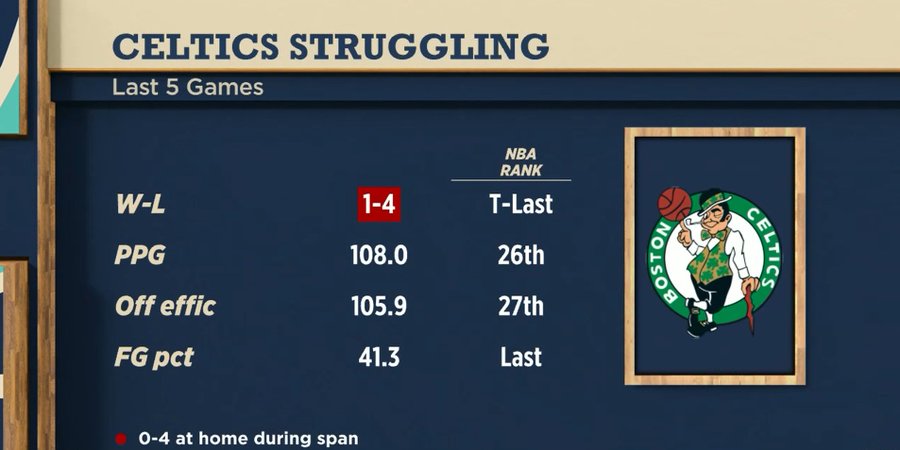 “They have not been healthy all season long and they’re not a deep team. They’re kind of top heavy in a way. They need to add a piece (a scorer off the bench)” – Perkins

“They’ve been playing against mostly good teams in that run and the Celtics have largely been a team that has maybe overachieved a little bit this year. We’ve been spoiled by what the they have been able to do. This won’t be something that is going to continue to spiral and carry on” – Andrews 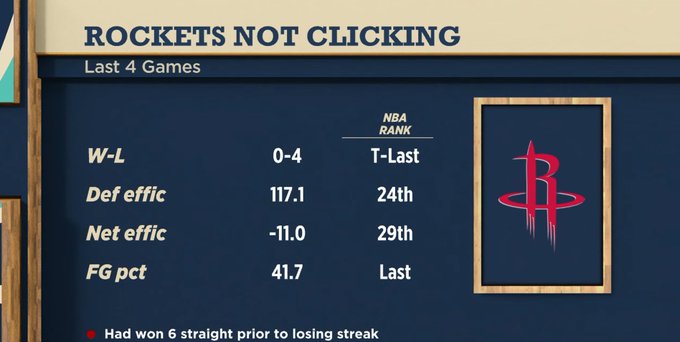 “It’s not everything because of this specific streak, it’s because this is a pattern. We see this at this time for the last several years: Rockets are great in the regular season, they make these adjustments. This isn’t about small ball and that failing or whether or not that’s going to be good enough, this is about the fact that the Rockets get in this groove and get going and they get to this point. That can’t be a pattern that continues” – Andrews

“What concerns me is looking at Nikola Jokic and whether he’s ready, he’s hungry and come out and play. You’re looking at whether or not your best players can step up and lead and that’s why the Nuggets get lost in the shuffle because you don’t see him, who has this amazing versatile skillset, step up and use it in those sorts of games and set the tone for the rest of the team” – Andrews

OTD in 1999 – Stephon Marbury with the no look bounce pass to KG who slams it home on the Seattle Supersonics!

How should Bucks handle Giannis down the stretch?
Sprained his knee in a game vs the Lakers

Should Raptors be considered a contender in East?

“Of course they can be a contender. They are the defending champs. We shouldn’t be surprised” – Andrews