Did you get invited to Lakers block party on Sunday night?
Swatted 20 blocks vs the Pistons (The most by any team in a game since November 2001)

“I was invited, but I don’t meet the height requirements” – Shelburne

“I was at the Golden Globes party” – Windhorst

Concerned about Clippers defense over weekend?
Gave up 140 points to the Grizzlies on Saturday, where they lost by 26 points; gave up 132 points to the Knicks on Sunday, but won the game 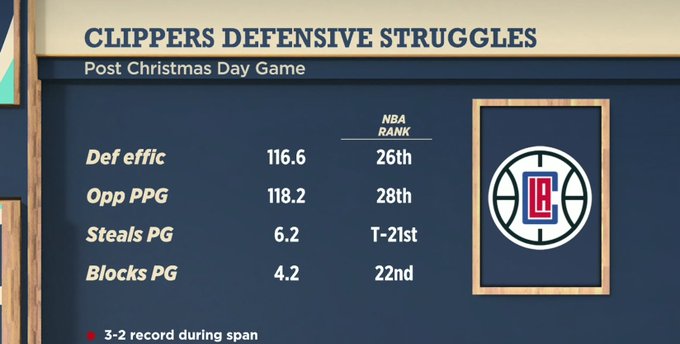 “I’m not concerned in the sense that they’re winning most of these games, they don’t have Kawhi and Paul George in a game together with any kind of consistency. They’re not building anything. The only thing you get concerned with is essentially if the regular season is de-emphasized for your stars, it is hard to keep the rest of the team feeling like the regular season is important, especially when you’re playing against bad teams” – Shelburne

“We’re going to have a team that, because of guys sitting out and just general focus issues, we’re not going to see their best. Where you often see lack of focus show up is on defense. Their lack of continuity and lack of ability to bring consistent defensive effort could cost them a seed or two” – Windhorst

“They have de-emphasized the regular season” – Shelburne

“What’s kind of surprised me is that Doc Rivers has made a decision to not even practice Kawhi and Paul George together. Doc has a strategy, but this is unusual” – Windhorst

“On that particular play, it was pretty clear that he had Chris Paul on him and he wanted to get in the post and John Beilein wanted him to go out and set a pick for Collin Sexton. That’s what he’s upset about” – Windhorst

“You have one moment or a couple of outbursts that go viral. It reminds me a little of LeBron last year where you had this spot shadow on him, getting frustrated with his young teammates and not playing defense. That becomes the narrative. That viral moment is so easy to attach a narrative to. That’s what Kevin’s got to watch. In terms of where they could trade him, this is just a money situation” – Shelburne

Kuz on the trade block? (Per Sam Amick/The Athletic)

“They will certainly listen, but there’s not really a great trade out there that’s going to establish what they would need in return. This has been an audition for him all season long. The Lakers are in desperate need of somebody who can stabilize that second unit and who can hold a lead when LeBron & AD come out of the game” – Shelburne

OTD in 2001 – Andre Miller (Cavs) driving to the basket and posterizing Theo Ratliff of the Sixers!

Anfernee Simons for the dunk contest?

What’s the most disrespectful thing you can do after an ankle breaker?

Where does this backboard shot rank all-time?

Should Mike Miller have thrown an outlet pass?

“I didn’t even know this was in his repertoire. I didn’t know he had so many of these” – Windhorst

Jerry West: Luka will be better than Dirk

Agree with “The Logo” saying Luka will be G.O.A.T Maverick? 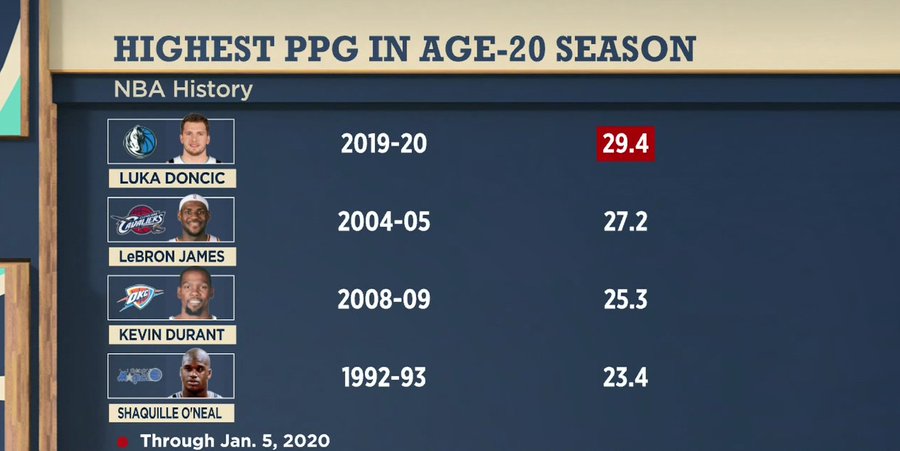 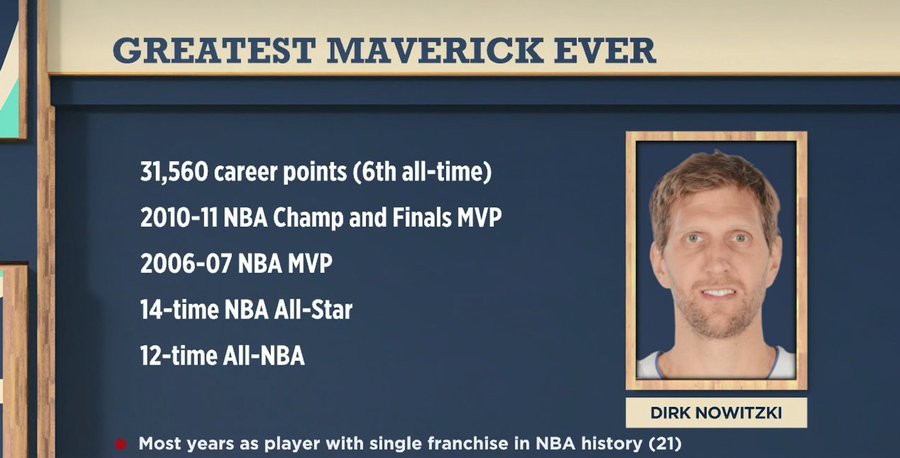 “I want to know what he thought of Luka on draft night. Anybody can look at Luka now and say he’s great. What were Jerry’s notes, if he had them, on Luka?” – Windhorst

“For Jerry to have this kind of complement and that kind of praise for a player at this stage, he doesn’t make statements like that” – Shelburne

“The big question with Luka: Dirk Nowitzki is a champion, he’s playoff proven and tested. What we know about Luka is based on the regular season right now and what he did in Europe. We don’t know what’s going to happen when they have real expectations, when there’s real pressure on them, when they have to deliver in those clutch moments. I’d bet on him. This is what’s going to be fun about watching him over the next 5-10 years of his career” – Shelburne

“It’s not up to the Nets. It’s up to Kyrie. If he’s going to be very conservative recovering from injuries moving forward, that’s something to pay attention to if you’re the Nets” – Windhorst

“Once you’re talking about surgery and you’re heading in that direction, you  probably should go ahead and do that because the team they want to contend with is the team with Kyrie Irving, Kevin Durant and DeAndre Jordan all healthy and ready to go and that happens next season” – Shelburne

Russ’ shot selection key to Houston’s success?
He is last in the NBA in three-point shooting (23%); Rockets are 14-1 in games when he attempts fewer than 5 threes 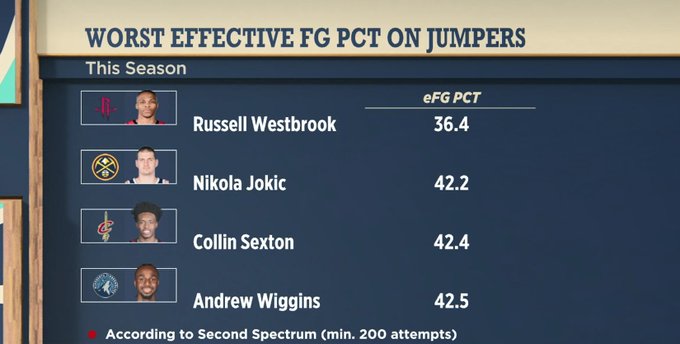 Note: Three-point makes are weighed more heavily in this formula

“When Houston is playing better, it’s when Russ is in attack mode. That’s all they really need him to do” – Shelburne

“I don’t know if teams are going to guard Russ in the playoffs. The Harden/Westbrook coupling was sort of a marriage of convenience or maybe even desperation. They both really needed help and it’s not a great fit” – Windhorst

“He needs to evolve into the old man game (D-Wade, Kobe) where guys start to lose a little bit of their athleticism” – Sedano

Drummond on Pistons: “I would love to play here the rest of my career” (Via Nick Friedell)

What should Pistons do with Andre Drummond? 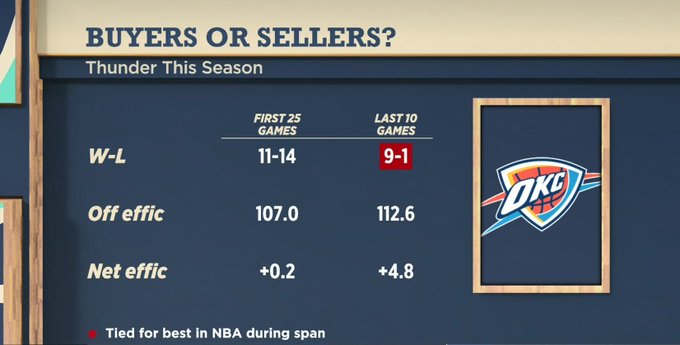 Embiid on losing: “It’s taking a toll…” | What needs to change for Sixers?

“Everybody is sort of a little bit uncomfortable. They don’t have enough spacing for Embiid, they have to play Al Horford as more of a spacing player than an elbow player, Ben Simmons is under pressure to shoot threes. Can they bring it together? Yes. I look at them now and say, ‘This is not a team that scares me.’ Even though they have the talent, they should scare everybody. Changing the roster to make them fit is probably what will have to happen” – Windhorst

“Embiid and Simmons are in a place where they’re the only ones who can solve this. It’s going to have to come from them. They are the foundational pieces, they are the result of the process. Embiid might need to be direct about it in order to get the result from Simmons” – Shelburne

“It’s coming from Giannis and he is pushing this team to win every game. There’s no de-emphasis on the regular season” – Shelburne