Amin Elhassan (End of show only): 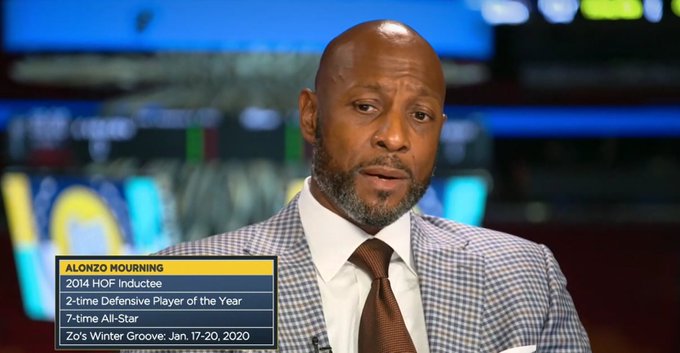 Do Heat need another piece?

“They need another piece, but not right now. They need to stay put this season. I think they can go deep into the 2nd round and maybe go to the conference finals and make a push. They will add a piece, but that’s in 2021. I think they need to add Giannis because he would be a great fit here. This Heat culture is Giannis. Jimmy and Giannis on the same team would be phenomenal” – Perkins

“They could use another piece. They need a lot of breaks to come out of the East. 2021: Pat Riley is a big game hunter. They’re going to be patient” – Sedano

“Maybe you try to pry a [Davis] Bertans away from Washington, maybe try to get JJ Redick down here from the Pelicans. That kind of shooting could still help this team” – Nichols

OTD in 2002 – Desmond Mason of the Seattle Supersonics with the nasty one-handed poster dunk on Voshon Lenard and the stare down afterward!

Are dunks & blocks better with 2 hands?

Encouraged by Nuggets shooting vs the Blazers?
They shot 18-36 (50%) from three

“I am because it’s been pretty poor, particularly from the perimeter guys” – Sedano

“I’m not encouraged. They got to be more consistent. The reason that the Nuggets are in this position is because they’ve been hanging their hats on the defensive end” – Perkins

Should Andre Drummond get outta the way the rest of the week?

“Much respect to Drummond. He should keep challenging them” – Perkins

“You got to take that challenge” – Sedano

“Not at all. He didn’t play the rest of the game” – Perkins

“He’s a baby LeBron, minus the hops. I would love to play with Luka” – Perkins

“He’s got a different kind of athleticism” – Nichols

“Yes. This team is really good. They have all these guys that are playing their roles. They could go to the 2nd round and actually make a push in the West” – Perkins

“They remind me a lot of this season’s Miami Heat team. If they get a break or a bounce, who knows? They could potentially be in the Western Conference Finals” – Sedano

Reaction to Dion Waiters suspension?
Heat suspend Dion for the third time this season for “failure to adhere to team policies, violation of team rules and continued insubordination”

“When I played with him, he was very quiet. It’s very disturbing. It’s not good for the younger guys. Dion is not setting a great example” – Perkins

“He’s only one of two guys in the last 15 years to have three suspensions in a season. I would be stunned if he played again for the Miami Heat this season” – Sedano

Perk on playing against Alonzo:

Heat surpassing your expectations this season?

“I always expect us to do well simply because of our development and preparation throughout the year. We prepare to be contenders every year. That’s the mentality of this organization. It doesn’t surprise me” – Mourning

What’s the story behind your famous meme?

What made you establish Overtown youth center?

Current player who remind you most of yourself?

“Clearly, Jimmy Butler. He’s a miniature version of myself. The way he plays on both sides of the ball, defensively, as well as offensively. He can impact and change the game with defense” – Mourning

“I would say Giannis because he’s just like Alonzo in this capacity: He brings it every possession” – Perkins

Zo, you speaking to Vince these days?

“That’s not true at all [that I didn’t speak to him for 6-7 years]. I got the utmost respect for Vince. Obviously, I wasn’t pleased by him dunking on me” – Mourning

“I didn’t expect that” – Perkins

OTD in 2003 – Stromile Swift (Grizzlies) with the crazy one-handed alley-oop dunk vs the Nets!

Trust more: Lakers on road or Heat at home?

“Miami is missing Dragic off the bench. I’ll roll with the Lakers” – Perkins