Giannis having too much fun with kiss cam?

“That was a 6th grade move” – Windhorst

Harder mentally or physically for Melo to get back into NBA?

How has Melo impacted the Blazers? 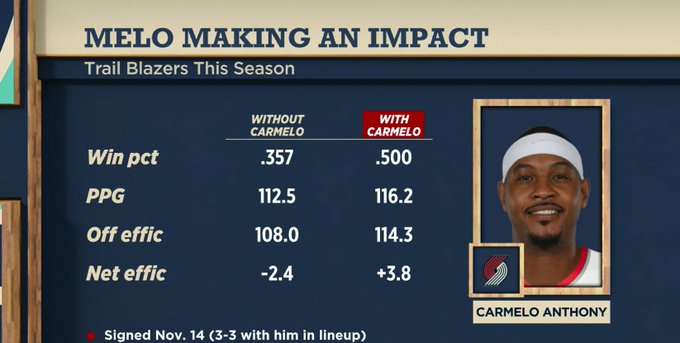 “There’s going to be an up and down. We can’t over dissect who he is right now. That’s not fair to him” – Jefferson

OTD in 2000 – Vince Carter finishing with the monster reverse two-handed slam on the Wizards!

Should everyone do the Al Horford flinch?

“This is his thing. Leave him alone. He does do it on purpose” – Jefferson

What got into Kelly Oubre Jr. vs Hornets?

“This is one of the strangest games I’ve seen all season. He was just average to below average and then the last 2 minutes of this game he looked like LeBron ” – Windhorst

“Being in Phoenix has been great for him” – Jefferson

Bismack Biyombo’s teammates too shocked by his eurostep?

“That euro is gorgeous. Good for him” – Jefferson

What’s next for David Fizdale?
Knicks have lost 7 straight games! 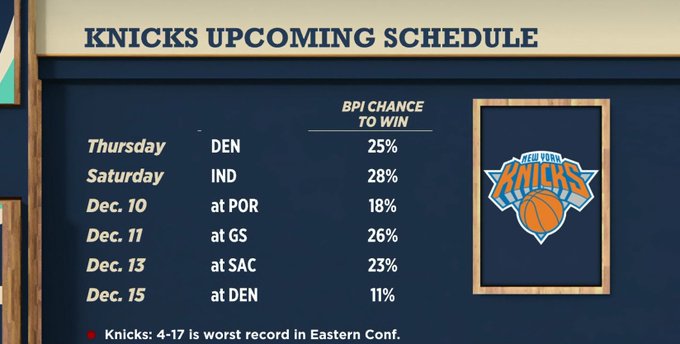 “I was mildly surprised he wasn’t fired today” – Windhorst

“The team has not responded to the adversity. The only thing that they really have left to do right now is to say, ‘Let’s change the coach to see if we can salvage this'” – Windhorst

“The front office is trying to salvage their jobs. This is not a Fizdale problem” – Jefferson

“Because of the storm that was caused by that press conference, changing the coach might actually help by at least getting rid of the uncertainty” – Windhorst

Coach Malone: Lakers “at a whole other level” 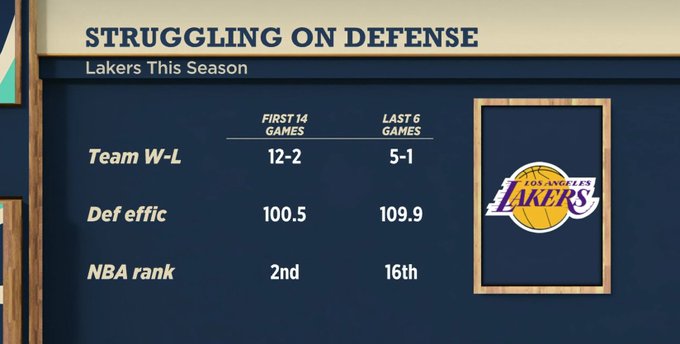 “The Lakers have these incredible offensive weapons and the Nuggets tend to win with a committee on offense. I’m a little bit worried about the Lakers. Their defense, which was elite the first 3-4 weeks of the season, has slipped a little bit and it really kind of dates back to when Avery Bradley got hurt” – Windhorst

“A lot of it is establishing your rules. They know what their principles are and what they can accomplish” – Jefferson

Concerned about Kuzma’s fit with AD & LeBron?
Has scored 5 points or fewer four times in the past two weeks 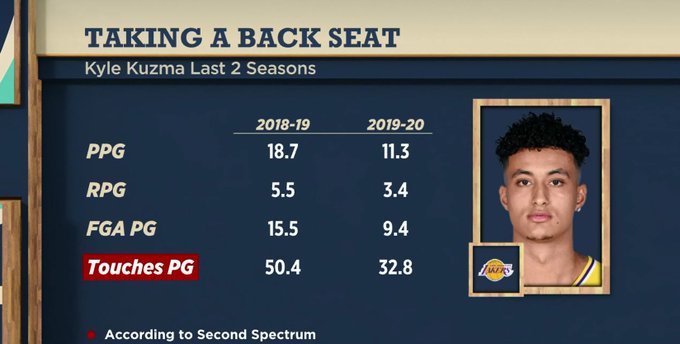 “When you’re trying to win a championship and you’re on that caliber team, everyone sacrifices. He’s the 3rd best player, offensively on that team. He’ll get it back” – Jefferson

“The person who seems to be worried about the fit is Frank Vogel and the reason is he’s only playing 22 minutes a game, 11 minutes less than he did last year. But the 22 minutes leads me to believe that Frank Vogel isn’t confident with some of the more elite lineups he’s got out there with them and so he’s got to convince his coach that he can fill the role enough to get some more minutes” – Windhorst

How Harden is the best scorer since MJ by Kirk Goldsberry 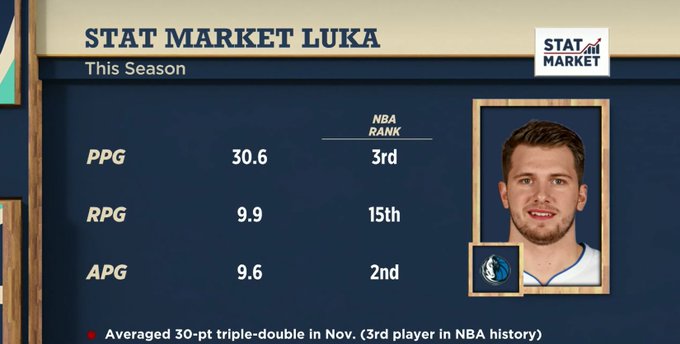 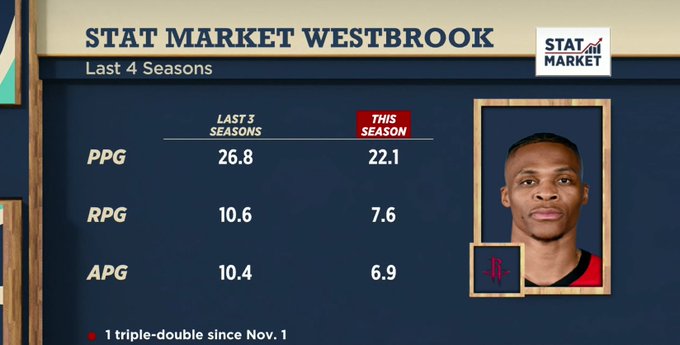 Windhorst: Buy
“This is his new reality. He knew this was going to be the case when he came to Houston”

Jefferson: Buy
“He has adjusted his game. He’s taking a step back and you have to do that if you want to get to the place that him and James want to get to”

“The Rockets style of basketball still concerns me” – Jefferson 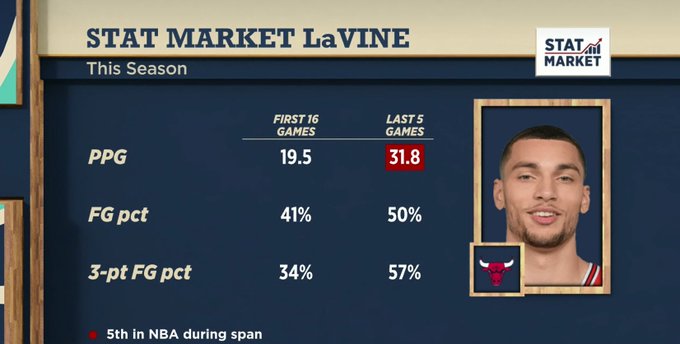 OTD in 2013 – Avery Bradley with the amazing behind the backboard shot vs the Bucks!

Bright Side?
Warriors held to season-low 79 points vs Hawks

“Nobody got hurt” – Windhorst

Feeling The Itch
Concerned Zion hasn’t started on-court work?
Is “itching” to get back to action, according to Pelicans head coach, Alvin Gentry

Is it the Shoes?
Reaction to Dennis Schröder wearing KD’s signature shoe in OKC? (Per Erik Horne/The Athletic)

PG on Melo: “I just hate the narratives that’s created by him being back”

“People have had his back when he was gone and people, now that he’s back and proving to people they have his back. One thing that needs to be recognized is that Carmelo went out and said, ‘There was some things I could have handled better.’ He still felt the need to go out there and address that” – Jefferson

“Ignoring that would not be fair” – Windhorst

“Raptors. Pascal Siakam and what he has done has been so impressive. I think the leading vote-getter for most improved player again and he’ll be an All-Star this year” – Jefferson

“Heat. Kendrick Nunn, who would have gotten this prop bets, wins rookie of the month” – Windhorst

Kyrie Irving will miss next 2 games, per Coach Kenny Atkinson 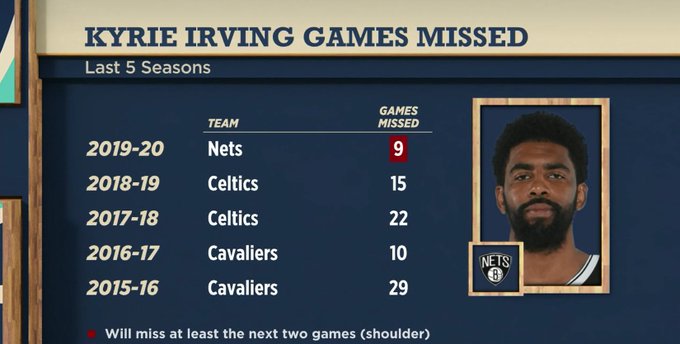 “They want to be cautious with him. Their team is winning” – Jefferson

“This is a real injury. Shoulder impingement is something that can linger for months” – Windhorst