Nets GM Sean Marks: Expectation is that KD does not play next season

“Where he is in his career and the investment this organization has made in him, the plan was never for him to play this season” – Wojnarowski

Monologue: Deal or No Deal?

In an interview with NBC Sports, Monte Poole, Iggy told this story about being traded 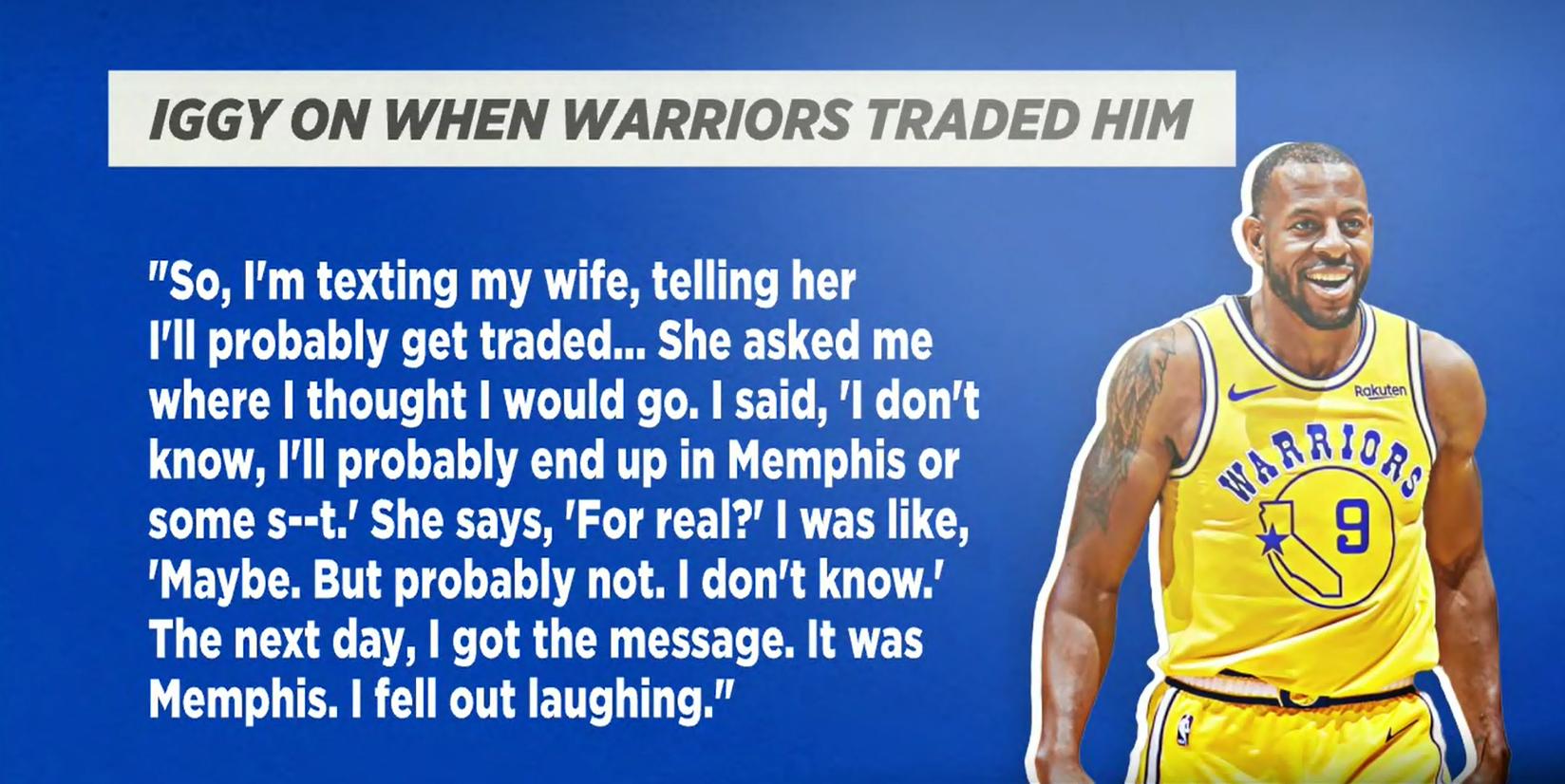 What teams can make a move for Andre Iguodala? 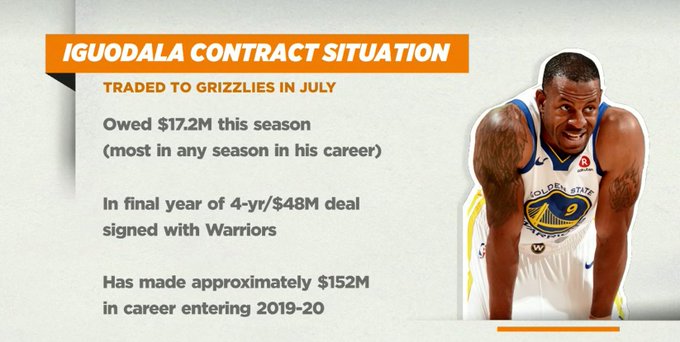 Any motivation for Iggy to take less money? 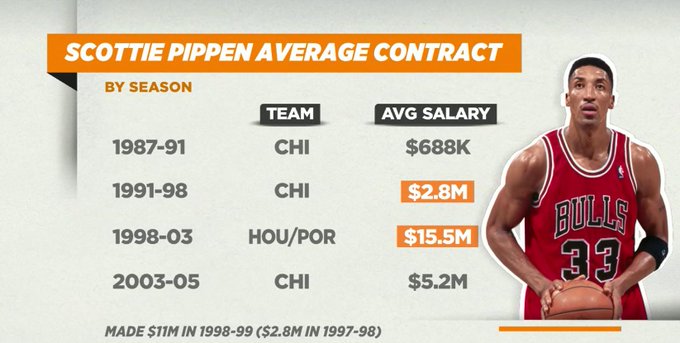 “I think he realizes that he’s at a stage in his career that he’s probably not going to get this kind of money ever again. He’s not willing to walk away from it. He definitely wants to still play with a team that’s a contender, but the best thing that can happen for him is to continue to rest his body” – Pippen

“His deal was that he felt like Memphis got what they wanted out of this deal, that he was going to get bought out and be able to go play for a contender. He ultimately wants to play for a team like the Lakers or Clippers. He still believes that he’s got playoff type of basketball left in his body. He’s not really thinking about going with a team that is trying to compete for a playoff spot because he doesn’t feel like his body can carry through those 82 games of hard work” – Pippen

How are NBA GMs reacting to new anti-tampering rules?

“It’s going to be hard to really document all this stuff. It gives the smaller market teams a little bit of a chance because the big market teams are the ones that’s doing all the tampering and to be honest: It’s the players and the agents” – Pippen 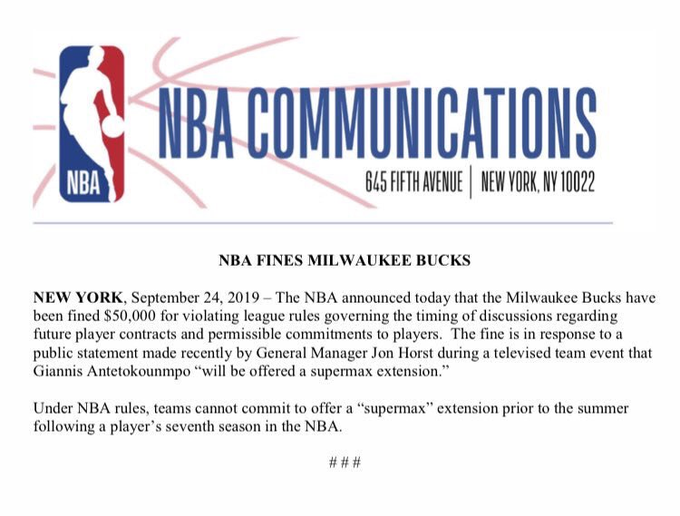 “That is a tough one there because who’s not going to think to offer this kid the supermax? He’s the MVP” – Pippen

Vernon Davis is a big fan of The Jump!

Is this how all gatorade is mixed in the pros?

Ever seen Rick Fox this happy?

Scottie, think you could defend this guy in the post?

Would CP3 to Heat make sense?

“Chris Paul is going to be making $38.5M this year. Maybe this would make sense. You’d have to give up Goran Dragic (expiring contract) and Justise Winslow, but then if you’re OKC, you got to still take James Johnson, Dion Waiters or Kelly Olynyk, contracts you don’t really want to take on” – MacMullan

“There’s a lot of reasons that he wants to be in Miami: Jimmy Butler, it’s a great market and its a team that has a chance to be able to compete in terms of the East. He wants to be in position where he can compete night in and night out” – Pippen

Kuz in jeopardy of missing start of training camp? (Per Marc Stein/New York Times)
Foot is still healing from his time with Team USA

Internet know more about me than I do myself apparently lol

“You’ve got to sit him and give him time to rest. He’s probably ahead of where they thought he would be as a development player because of being able to play with FIBA. He’s definitely going to be an important piece for them come midseason because he’s one of their youth players that they’re going to need to put a lot of minutes and a lot of time into if they want to be fresh come playoff time” – Pippen

“If you want to be fresh come playoff time, you give him all the time he needs to get where he wants” – MacMullan

NBARank – Best players this season from 50-31 on ESPN.com

Note: These rankings are based on what kind of season the experts thinks players are going to have this coming season, not a rank of who are the best players for their whole careers. They are ranking who they expect to be best this coming season 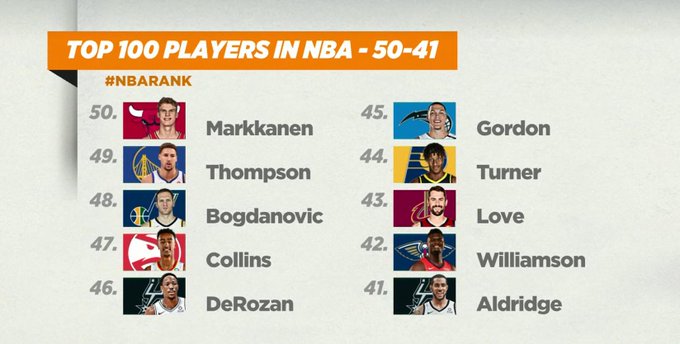 “Way too high. How did he get up over Klay? I’m not agreeing with this before we even see this kid play a professional game” – Pippen

“Little too high. It’s going to take him some time. I think they’re going to take a lot of pressure off him and not feature him all that much to start. Little too much pressure” – MacMullan

Porzingis No. 34 overall on NBA Rank: Too high or too low? 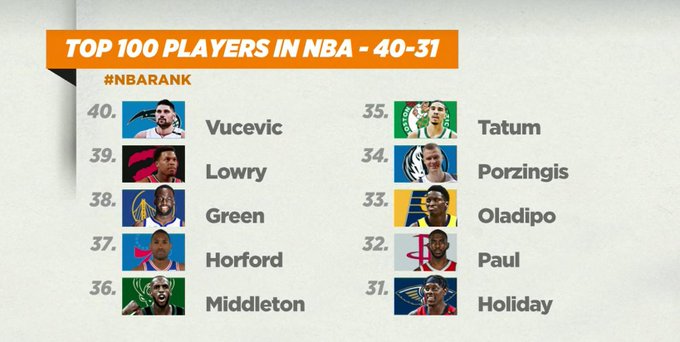 “Too high. He didn’t play all year, he switched teams and he’s going to be on a team that’s going to feature Doncic” – MacMullan

“The list sucks. This is just wrong. I think you’re putting pressure on him to have to play to that level. He’s got a lot of making up to do and build the confidence back up to get over this injury” – Pippen

Oladipo No. 33 overall on NBA Rank: Too high or too low?

“Too high. It’s going to take him some time to get back on the court and to start feeling good about himself. He also has to find his way back within the team chemistry again because other guys have moved up since he stepped away” – Pippen

“Too low. He will be the focal point of the Pacers. They’re going to be cautious. I think he’ll be back soon enough that he deserves a better ranking than that” – MacMullan

Shaq is still upset about missing unanimous MVP by 1 vote in 2000?
Had 121 of 122 possible votes; The other that didn’t vote for him: Fred Hickman, who voted for AI 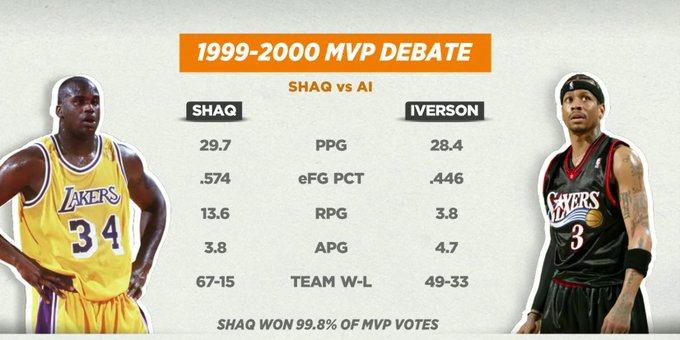 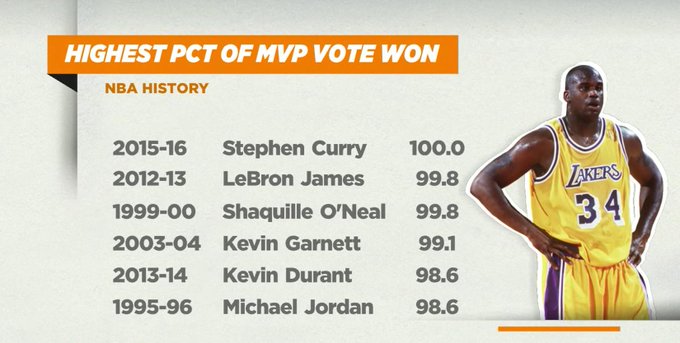 “I don’t blame Shaq. This was Shaq at his best. This is one of the greatest NBA seasons of any player…EVER! He was unstoppable that year” – MacMullan

“I have to agree with him. They blew it because Shaq was a special player” – Pippen

Pippen on playing against Shaq:

“It’s pretty shocking but you have to give credit to the other players that played in that era. Michael was the most unstoppable” – Pippen 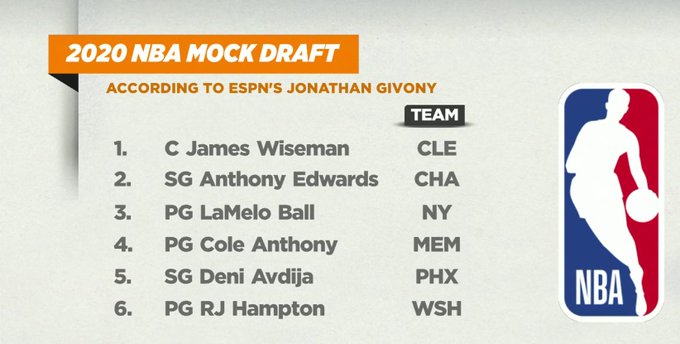