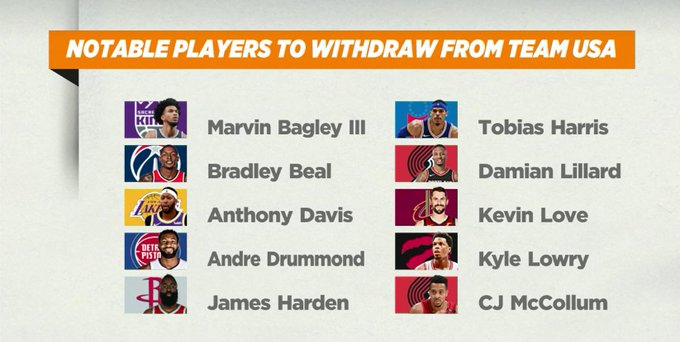 “All the superstar players: They dropped out. I knew it was going to be a difficult road for them. But we are ahead of the standard no matter who puts that jersey on. We should at least be able to get to the medal rounds” – Pierce

“This team likes to play small. That leaves them vulnerable to that. To guys on the inside and getting beat up on the boards” – Elhassan

Dwight Howard pulled up to Venice Beach and had an awesome dunk off vs pro dunker Chris Staples @VENICEBALL @DwightHoward 🙌🔥 pic.twitter.com/CoqPWbPbuw

Should the professor be brought out for halftime shows?

Does this pass confuse your brain?

👀 Watch till the end for the dime of the year 👀 #3x3WT pic.twitter.com/8kFPkeBAm0

“I think he did that by accident” – Pierce

Share KD’s confidence in decision to go to Brooklyn? (Per the Wall Street Journal Magazine)

“He believes he doesn’t get enough recognition. He still believes he’s the best player on the planet. He wants to show people he can be that player again with the Nets but after coming off an Achilles injury,  I don’t know if that’s possible. I think he knew he wanted to go to Brooklyn probably in training camp last year” – Pierce

“I don’t know if he’s going to find what he’s looking for in Brooklyn. I do know it’s not going to be as easy as he probably thinks it is because of the all the newness” – Elhassan

Agree with KD’s view of Warriors offense? (Per the Wall Street Journal Magazine) 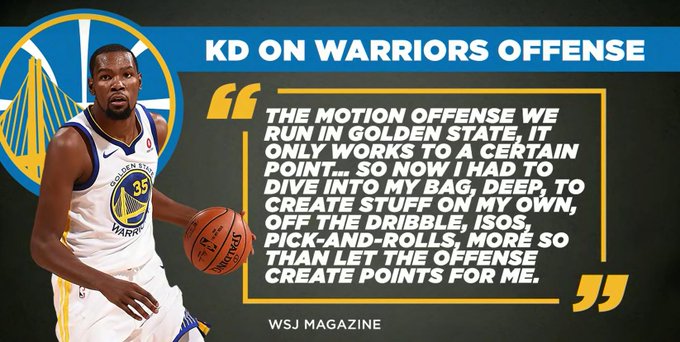 “The system worked. It wasn’t broken and the reason they only lost this year is because of the injuries. I don’t get what he’s searching for” – Pierce

“Happiness is hard to grasp for him” – Elhassan

David Stern tells The Undefeated : “I have no regrets” by Marc J. Spears

David Stern: “I have no regrets” on time as NBA commish

Stern on banning Sterling:”[Silver] made the only decision that I think would have been the right one”

“Bradley Beal, if he stays healthy, will be the most valuable trade chip come February [trade deadline]” – Nichols

Kanter on Knicks: “MSG is amazing…but the ownership”

“As long as Jim Dolan is there, the black cloud is going to remain over New York City” – Pierce

Kerr on new-look Warriors: “We’ve got to re-imagine everything and adapt accordingly”

Warriors have enough to stay afloat until Klay comes back?

“Initially, I would have said yes but I’m not so sure. A lot of it has to do with how Draymond Green performs this year. I think we’re going to really see what type of player Draymond is this year” – Pierce

“They’ll be fine offensively. The bigger problem is defensively. Draymond is going to have to cover up so much defense for everybody else” – Elhassan

“I guarantee they’ll be a better defensive team than offensive team, before Klay gets back” – Pierce

Or….because of this bill, you can work with everyone to create a national policy that is fair to the athletes. 🤷🏾‍♂️✊🏾👑https://t.co/Ey3lBzeB3v

“I’m so happy that this has finally come to the forefront. The players deserve it” – Pierce

“This could potentially take money away from the schools. Make it fair for everyone!” – Nichols

“He’s the perfect player for these type of games. Australia should be the favorite” – Pierce

How does World Cup loss impact 2020 Olympics for Team USA?

“I expect AD, Harden, Westbrook and other superstars to show. The magnitude of the olympics is much greater than the world cup games. You’re going to have your superstars back, on the stage where they can represent their brands” – Pierce