Surprised Kawhi opted for shorter deal?
3-year/$103M with a player option after year 2

“No. When he’s able to opt out, he can get the supermax and is going to get paid even more” – Spears

“They’re a joke and forget players talking to each other. If you want to actually have rules you can enforce, you have to completely recreate what those rules are because they’re not being enforced and nobody is following them” – MacMahon

“It’s a waste of time and energy. Just let it go early” – Spears

Are trade demands really that bad?

"The Thunder thanks Paul for his contributions to the organization and our community. We are proud that Paul is a part of our history as an organization and that some of the best basketball of his career was in Oklahoma City." – GM Sam Presti pic.twitter.com/L725MZZ4Xw

“This is a business. The owners want to keep acting like its not a business” – Spears

“Let’s not act like this is just suddenly a problem. This is something that has been happening for generations in the NBA” – MacMahon

“The elite players (1% of players) are finally seeing the power that they have. When you have it, you better use it because you’re going to lose it fast. They understand that this is a business” – Spears

July 10, 2014 – Giannis Antetokounmpo with the sensational move and finish at the basket in summer league!

How much money would need to be offered to take a charge from Tacko?

Tacko tried to kill me

Is Tyler the Herro the Heat need?
Statline: 25 points, 7 rebounds, 5 assists vs the Magic

“It might be the hero that the OKC Thunder needs” – MacMahon

Is headband LeBron going to be a thing?

In or out on NBA Coach’s challenge?

“I’m fine with the challenge, but they got to speed up the replay process” – MacMahon

“We have a situation now where a call could be reversed that determines a game. The end result is going to be you’re going to see more foul calls because once you make the call, it can be reviewed, but if you don’t make the call, then it cannot be reviewed” – Shelburne

“You should call more fouls because they can always be reviewed if you were wrong. But the only thing I worry about is the turn with the finger instead of the coach’s flag” – Shelburne

“It’s pretty embarrassing but in terms of things that have happened that are embarrassing for the Knicks over the last year, it’s down the list. Also, having most of your rotation playing summer league in you’re winless, not a good look” – MacMahon

“This isn’t Williamsport, this is Vegas. Why do they need to shake hands?” – Spears

“I give him credit, but I’m happy for him. Barrett is always going to have a spotlight on him because he is in New York. He gets to feel that and get used to that this summer. This is a good thing for him whereas for those other guys, come training camp, that’s going to be their summer league. They’re going to be a step behind” – Spears

“I give him credit for competing” – MacMahon

Amar’e Stoudemire: “I still have a lot to offer” (Via MSG Networks) | Could you see Amar’e making a comeback?

“I think he probably has more game left than leadership to offer. When was he ever known as a leader?” – MacMahon

“The thing that hurts him and Monta Ellis, teams probably see them still as the diva that they kind of were when they were players. I don’t think they trust that they’ll come in and be the leader that they’ll be” – Spears

“Players like Monta and Amar’e, there is something you can give in the same way Vince Carter is doing” – Shelburne

Source: Kawhi signs for less than max to align with Paul George deal

“This actually bodes much better than people realize. They’re trying to do something that’s not been done: reestablish the Clippers as a thing. Every time he’s won somewhere, he’s left. It sets up [Kawhi] to be there for the long-term” – Yates

“This is the move that LeBron James did in 2014 that I thought a lot more players were going to attempt. But so far, only LeBron James and Kevin Durant and now Kawhi Leonard have done which is to maintain maximum flexibility and leverage on your new club” – Shelburne

“If I’m the Clippers, I’m not concerned about this. I’m confident that with the supporting cast they have, a co-star in Paul George that they will be contending for titles. If they handle their business,  then Kawhi will be there a lot longer than 2 years” – MacMahon

“The Clippers are going to be on pins and needles those entire 2 years trying to make sure he’s happy. It’s a good problem to have. But I’d be really fearful leaving money on the table, especially if you have injury problems” – Spears

Any silver lining to Wizards offseason?

“Bradley Beal is going to have plenty of value” – MacMahon

Canyon of Heroes
Closest Knicks fan will get to a parade?

“The thing I’m most concerned about with the Knicks this year is what’s going on with Fiz. I’m really interested to see how he handles this team” – Yates

“More money and I also hear that he quietly has a good connection with Fizdale. Also, in that meeting that they had, he connected with him even more” – Spears

“I get his motivation. He’s got 5 million reasons to do it. It’s a bad look to back out of a deal. But how many power forwards do the Knicks plan on signing this summer?” – MacMahon

“They lose the Oakland culture, they lose a lot of the players. But the Warriors culture starts with three guys: Steph, Klay and Draymond. And until one of those three leaves, they’re still the Warriors” – Spears

“Iguodala and Livingston were great vets. But now the vets are now Steph, Klay and Draymond” – MacMahon

“They got a great run out of this. What more can you ask for?” – Yates

Westbrook likes IG post of himself in Heat jersey 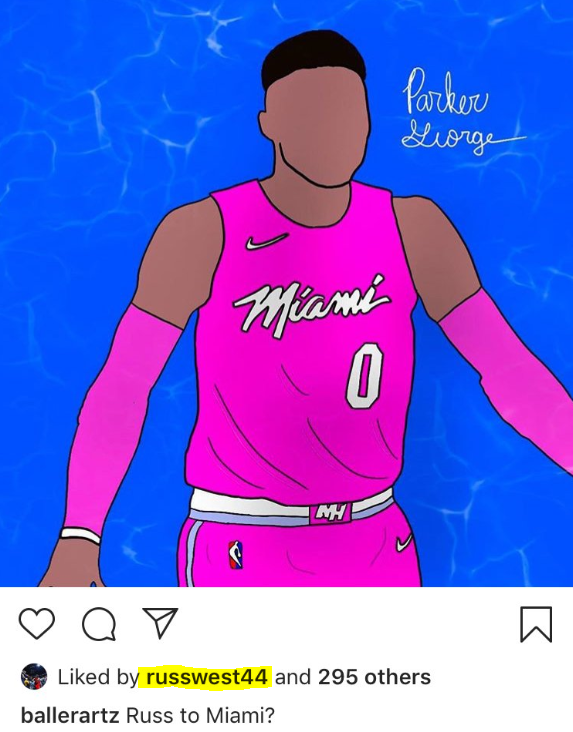 “I’m not quite ready to rule out the Rockets” – MacMahon