Appreciate the assist @kuz! Crazy that your first one to me this year comes off the court. 🤣🤣🤣🤣. #TeamworkMakesTheDreamWork

Monologue: If “Stat hunting” was easy, everyone would do it

But it might not have been for the reason you had originally thought (Via NBA/TNT):

The fact that Russ did it by “stat hunting” which basically means he did it on purpose doesn’t make it any less of a feat of accomplishment.

“Absolutely. To get a triple double over the course of the season is extremely difficult. The reason why he’s able to do that is because every night he steps on the basketball court, he’s the best athlete, he’s the hardest playing athlete, his athleticism is off the charts and he just plays harder than everybody. He wants it. His motor goes faster and harder than everybody on every night” – T-Mac

T-Mac on how great Russ is:

Warriors beef with refs going to cost them down the line?
KD ejected vs Nuggets last night

Coach Kerr after the game:

“Maybe a game here or there. It’ll happen” – Elhassan

“Giving it’s the regular season, these guys just want to get to the playoffs. There’s some frustration here” – T-Mac

“You’re going to have to keep your poise if you play against a team like the Rockets. If you cost yourself one game against the Houston Rockets, it could cost you a series” – T-Mac

“This is going to be a cranky season for the Golden State Warriors. I hope that in the playoffs they can change their mindset. This is a habit to react to officials this way” – Nichols

April 3, 1991 – Nate McMillan with the no look pass to Shawn Kemp who throws it down hard on the Kings!

Playing Fair; Anyone enjoy getting a mismatch more than Steph?

Denials; Myles Turner has more blocks than Cavs this season!

Underrated stat of the season:

The Cavaliers have 187 total blocks as a team

Myles Turner has 187 total blocks by himself pic.twitter.com/5Oz6UnUVWq

Backboards; Does Zion need to chill?

Zion back at it! 😱 Please tell me that goal is still attached tho… pic.twitter.com/veMhSzMZhp 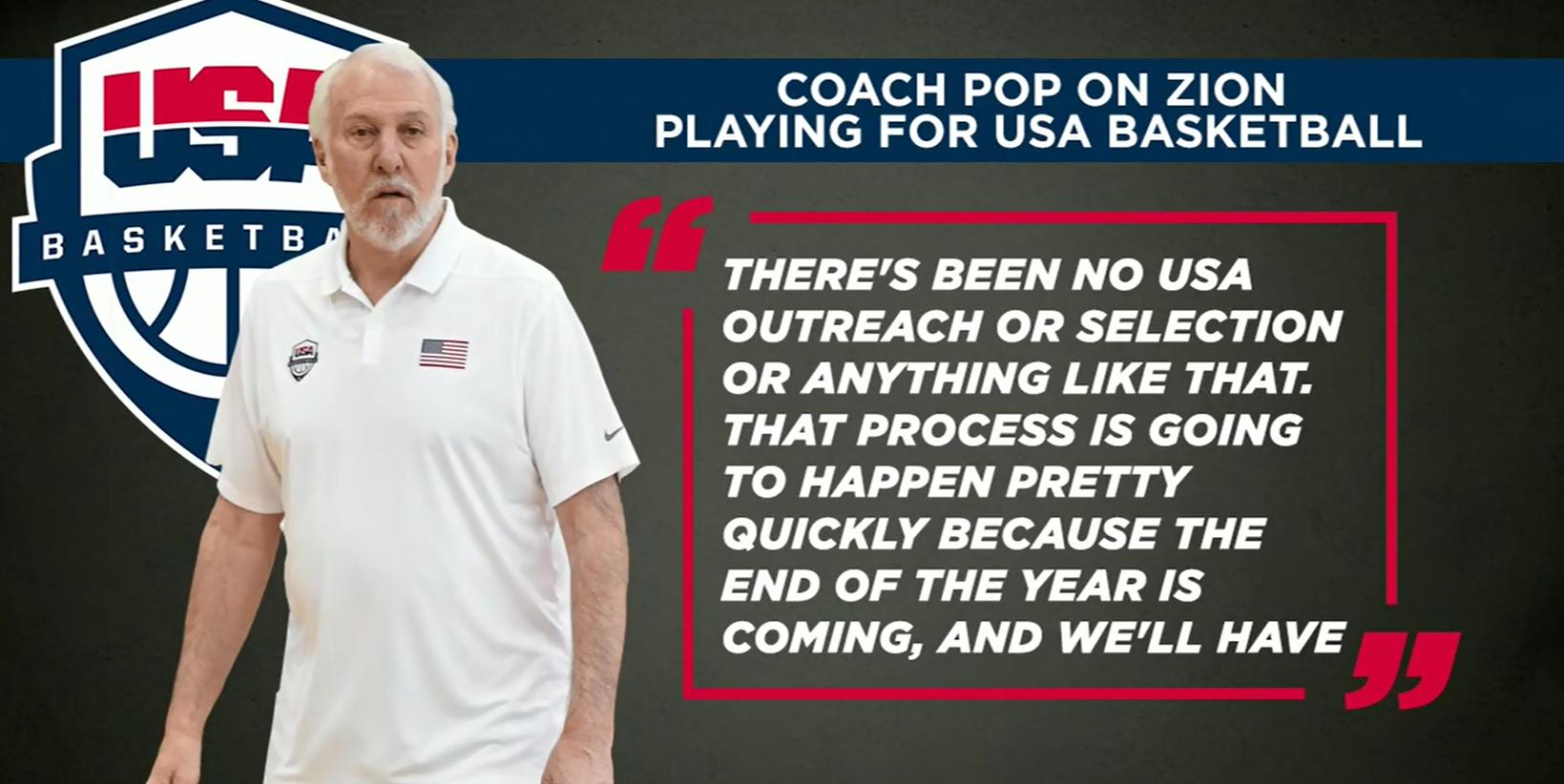 “Ink that [shoe] deal first, man. If he gets invited, it’d be a good experience for him” – T-Mac

“This is a tradition for USA basketball. There’s an internship. It’s big time for these guys to have an opportunity not only to be around those guys, but also see their work habits and work ethic and the things that you don’t get to see when you’re watching film” – Elhassan

Kings broadcasters, Grant Napear & Doug Christie on who should be the MVP:

What would it take to change your MVP pick?

“I’m leaning towards Giannis because every single player that I’ve talked to who I respect keeps telling me ‘Giannis, Giannis, Giannis.’ They respect what he has done in a team setting all year long” – Windhorst

Via “The Big Podcast With Shaq:”

Agree with Shaq’s comments on Giannis?

“They’re so different. Shaq was the most dominating player I’ve ever seen. I cannot believe on that discussion that he could even rate” –  Windhorst

Wizards owner on Wall & Beal (Via The Washington Post):

“This is a mess. You got a lot of bad contracts over there. The only thing you really have good going is Bradley Beal. I feel for him because he is coming into his own. Whoever takes over this job really has to come in and just do a lot of cleaning up” – T-Mac

“This job is incredibly in demand. People want this job…bad. It’s a desirable place to live and in talking to executives around the league, the opinion of Ted Leonsis as owner is very high. Part of it is because he doesn’t fire people” – Windhorst

“With the exception of Donald Sterling, Robert Sarver has the lowest approval rate of any owner since I have involved in the NBA. Nobody wants to work for Robert Sarver. Ted’s reputation is sky high” – Windhorst

“I would take the Suns job strictly because of the personnel that they already have: the young guns (Booker & Ayton)” – T-Mac

Hawks becoming sneaky good?
Windy’s piece on Trae Young and the Hawks
They are 5-5 in their last 10 games

“Atlanta’s fanbase is not a fanbase where they’re actually from Atlanta. They’re all over the place. It’s a great city to live in, but they don’t want to play there. It’s not an attractive place” – T-Mac

“I wouldn’t be surprised if they get some meetings with the top free agents [this summer], but that’s where you start” – Windhorst

“If I can buy stock on a non-playoff team, Atlanta would be where I would buy my stock” – Windhorst

“They have to keep building their young players and draft well in order to become a great team. They’re not going to get any top free agents this summer” – T-Mac

April 3, 2004 – Steve Nash with the nifty dime to Dirk Nowitzki who slams it home vs the Suns!

“Honestly, I think this was a good concept. They obviously didn’t do their due diligence whole and find out this guy’s background. It wasn’t executed well” – T-Mac

“I think it would take $5 billion” – Windhorst

“Or is there going to be a scapegoat at all? Her best friends are her cohorts in the front office, she’s incredibly close to Magic Johnson, she talks about Luke Walton as a member of the family, Rob Pelinka was Kobe’s agent. They had a 20-year relationship there. The difficulty is when you run a family business like this, where you have everybody so close, when there is blame to go around, how do you handle it? That’s a big thing” – Windhorst

“It’s all about health. If there’s blame to go around, you have to look at the guys that put the talent to surround LeBron James. They didn’t put those type of players around LeBron. They tried to go a different route” – T-Mac

Who you got in potential series: Spurs or Nuggets?

“This would go 7 games. I got the Spurs” – Windhorst

T-Mac’s and Windy’s favorite matchup if the playoffs began today:

T-Mac: Rockets vs Clippers
“Doc Rivers would have these guys excited to play against the Houston Rockets. He would come up with schemes to slow down James Harden a bit, make it difficult for him and impossibly push them to 6 or 7 games. But no upset”

Windhorst: Warriors vs Thunder
“Game 3 & 4 in Oklahoma City. That’s what I want to see”