Or you can theorized that…

But there are variables to this. If the Knicks do indeed land the No. 1 pick, it’s possible they could put together a package to tempt New Orleans and then use Davis to help lure Kyrie Irving over to MSG. But regardless, the chances of AD going to the Lakers now seem more remote than ever

When Rondo was playing with his son this morning, he hit nearly the same shot, on the same side of the court, as his buzzer beater. pic.twitter.com/l2IhQlmvtJ

Then this story from Chris Webber (Via TNT): 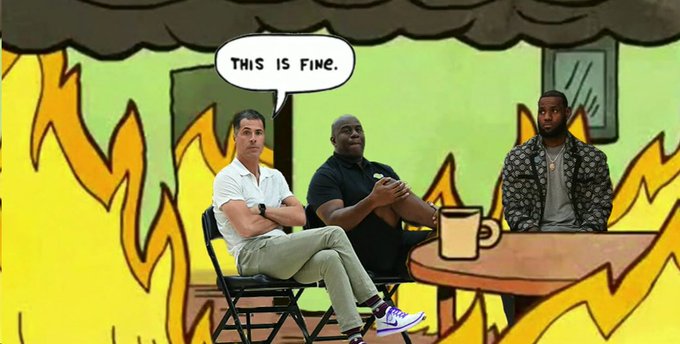 “This is an issue that Magic needs to address. These players have been sort of dragged through the mud for the last month or so with trade talk. He has to regain their confidence to someway and also assure them that they’re going to be Lakers for a while. He has to sell that to them. Again, they have to go play basketball. Having LeBron back will help these young players. He truly boosts their confidence and they just seem to be a better team when he is out on the court” – Pippen

“This is what I call the ‘Cone of uncertainty'” – Windhorst

“LeBron’s going to have to play some of his hardest basketball over the next couple months, if he wants to find himself back in the postseason” – Pippen

“I will say that Team USA is where the full-scale tampering goes on. The all-star game is a bit lower level. He got what he wanted. Tampering goes on anyway. Why not just do it out in the open?” – Windhorst

“LeBron did a great job of getting guys in his locker room that hopefully he can get in his locker room next season. This is a great start for LeBron in terms of his recruiting and being able to show his value of coming to the Lakers” – Pippen

February 8, 1998 – Shaq with the outlet pass to Kobe Bryant who finishes with the reverse dunk in the All-Star game in New York City!

Finishes; Will Russ exact revenge on the rim next game?

Messages; Are the bats trying to tell us something?
This time…it’s in Indiana! 4th time this year that bats have interrupted an NBA game (Mostly in San Antonio)

Boredom; Have the bench reactions been better this season?

76ers GM Elton Brand: “The window is now”
Traded for Tobias Harris, Boban Marjanovic and Mike Scott; Traded away Markelle Fultz to the Orlando Magic in exchange for Jonathon Simmons

Finals or bust for 76ers?

“Philly has set themselves up to making a good push at it. Defensively, I feel like they are the best team in the East. This is the time for them” – Pippen

“Elton Brand has totally put his stamp. This is his team now and I respect it and I also respect him reading the marketplace and sensing it’s time to go” – Windhorst

Bobby Portis have reason to feel slighted by Bulls?

“I’m sure Bobby feels that he is the best player. We will find out in time which one of these players will turn out to be the best player. It was best for him that he moved on Lauri Markkanen is a little bit ahead of him in terms of the NBA game” – Pippen

“It was kind of surprising that they moved on. They did that because a player became available that they had wanted for years. They had tried to trade for Otto Porter for a while. I can understand he is in his feelings a little bit” – Windhorst

What did Wizards accomplish at trade deadline?

“This does seem like a half measure because they left Trevor Ariza, who probably had value on their roster. But they did cut $50 million from their payroll over the next two years and they got out of the tax this year” – Windhorst

“They realized that they missed this window of opportunity. I feel like Porter was sort of part of that big 3 and now with that window of Wall getting hurt, it’s sort of vanished away for them. They have to look 2-3 years down the road” – Pippen

Pippen: Mirotic to Bucks
“He will help the Bucks instantly. Him and Giannis out there playing that 4 [position] 5 [position], tough matchup, those guys are very versatile. It really helps the Bucks to give them the opportunity to really open up the court more for Giannis”

Windhorst: Mirotic to Bucks
“It got me so excited because he fits so well”

Windhorst: Markieff Morris
“If you get him on the Lakers, it’d be a really nice addition”

Pippen: Melo
“Him and LeBron James have some familiarity. He can score the basketball”

Pippen: The field
“He’s probably not going to want to play for Boston”

Windhorst: Celtics
“They have the best package to offer”

Note: Bucks will have a max salary slot this summer
Will also have more salary cap space than the Lakers

With the trade deadline going by, it goes from the Buyers/Sellers Board…

To the countdown of…

Any concern with AD playing out lame duck season?

“The league office did get involved and they informed the Pelicans that if they did sit a healthy Anthony Davis, they would be subject to potential game by game fines for the rest of the season. $100,000 a game. The Pelicans have decided here that they could of fought it and they might lost the arbitration. But instead of fighting it, they want to do the ethical thing” – Windhorst

“Luka is my guy. I love what he’s doing. He better not stop what he is doing. I try to do my own thing as well. I’m trying to be great. I want the best for everybody in this class. I want this to be the best draft class of all-time. Luka is doing his thing” – Ayton

On the Suns not living up to expectations again and keeping their spirits up:

“Just knowing each other’s personnel and wanting to win and knowing that good days are going to come everyday and just going through it. I didn’t expect coming into this league to win every game. But I expect to compete to the highest level and have fun and learn from it” – Ayton

Standing by Shaq-Kobe comparisons for you and Booker?

“Very, very, very, very far. A guy like Devin is a really good shooter and can obviously score. For me, I’m just finding my way on dominating the game on a consistent basis” – Ayton

“Having Tyler here so far, he’s just really locked in and really active and happy to be here” – Ayton

“Those guys get paid better than the soap opera actors” – Windhorst