Monologue: Celtics aren’t in control of everything, but they do have some

The truth, of course, is that control is as much of an illusion in the NBA as it is anywhere else.

Yesterday, that was put into sharp focus:

If they do somehow get Davis, winning is what would convince him to stay, despite what he’s saying right now. The Celtics do not control everything about their future. The truth is, they never did. The events of the past couple of days just reminded them of that

“This team is built for the long run and possibly be in the Finals. They’re starting to live up to some of those expectations, but we won’t know until the playoffs start to see how this team has grown from a year ago” – Pierce

“They got continuity. Why would they shake things up? Stay the course” – Elhassan

Woj: AD willing to sign long-term with “handful” of teams

Beyond the Lakers and Knicks, the Pelicans have been made aware of "a handful" of teams that Anthony Davis would be willing to sign long-term with upon a trade, league sources tell ESPN. Boston isn't included on that list.

The Lakers have offered a new package to New Orleans that includes multiple young players, multiple draft picks and Pelicans salary cap relief for Anthony Davis, league sources tell ESPN. The offer appears to move closer to the objectives that the Pelicans are pursuing in a deal.

Bucks a realistic destination for AD?

“There’s a lot of uncertainty there. If you’re going to trade Anthony Davis, I don’t think you can make a deal like that and get back literally nothing but picks” – Elhassan

Should AD be more open to joining Celtics?

“I really don’t get it because he says he wants to go somewhere where he can win. Of course, if you go to Boston, you’re going to win. What is he really looking for? It’s mind boggling to me” – Pierce

“I know there’s a reason why Boston would not be on his list: A few weeks ago, Danny Ainge had that comment where he compared LeBron James to Donald Trump. You’re playing with fire there. It was a topic completely Celtics-free. You know there’s a very strange relationship between the President and LeBron James. You know you are insulting LeBron James when you say that” – Elhassan

“I’ve never been there before. Maybe I feel kind of anxious, maybe I feel like I want to prove them wrong and prove that I belong. It’s a tough situation playing along LeBron. There’s a sense of urgency to get a deal done” – Pierce

“The tension also is that Luke Walton’s footing is not secured in Los Angeles. When the players know that the coach is not 100 percent, they smell it and then they don’t react the same way to being told something like that” – Elhassan

February 4, 2000 – Steve Smith with the alley-oop pass to Rasheed Wallace from way outside hammering it through vs the Hawks!

Animal Control; Is the coyote the hero San Antonio needs?

Bulldozers; Reminder: Never attempt to take a charge from Boogie

He went on to say:

How excited should Knicks fans be about this summer? 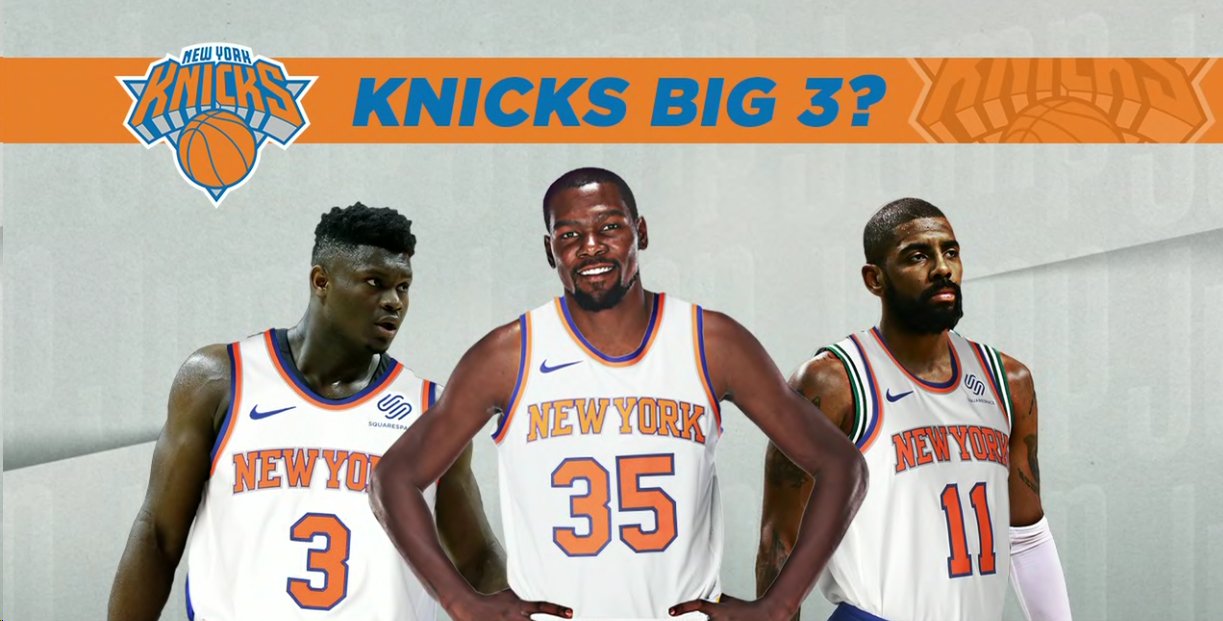 “They should feel confident at least at the guy in the middle (KD; picture above) right there and that’s the only one you really need” – Elhassan

“It’s not going to happen” – Pierce

Does Porzingis owe Knicks fans more of an explanation?

Mark Cuban on Porzingis-Doncic duo: “Our goal is to keep them together for 20 years” (Via ESPN’s Tim MacMahon)

Porzingis better off in Dallas long-term?

“People want to share a team. You don’t want to be the only guy there because you’re probably not going to be successful on a team level” – Elhassan

“This is a better run organization. Period. This is definitely a great spot for him. They’re starting to look like a San Antonio Spurs franchise built around it’s international players” – Pierce

“Part of why the Knicks traded him: There was a belief that, physically, his body would not hold up in the next contract” – Elhassan

What can Lakers offer to land AD?

The Lakers have offered a new package to New Orleans that includes multiple young players, multiple draft picks and Pelicans salary cap relief for Anthony Davis, league sources tell ESPN. The offer appears to move closer to the objectives that the Pelicans are pursuing in a deal.

“They’re not on a ‘picks timeline.’ They are on a ‘LeBron James is aging timeline'” – Nichols

Beyond the Lakers and Knicks, the Pelicans have been made aware of "a handful" of teams that Anthony Davis would be willing to sign long-term with upon a trade, league sources tell ESPN. Boston isn't included on that list.

“It’s just not that attractive. You can’t pair him with another superstar” – Pierce on the Clippers chances of getting AD

“July 1, everything is going to change in the NBA. The NBA we’ve seen in the last 4-5 years is going to be gone and there’s a new NBA that’s going to come on and we’re going to look back at this week when everything changed. Starting with Anthony Davis’ trade request, Porzingis, Kyrie Irving” – Elhassan

Warriors owner on free agency: “Nobody is going to outspend us” (Via Tim Kawakami/The Athletic)

“This is the only logical way that the Warriors can take and survive if things fall apart (people leave). Them saving money will not allow them to sign new guys. All it does is save money in their pockets” – Elhassan

“At the end of the day, you spend the money because this is as guaranteed as you get to a ring” – Elhassan

“You can find somebody that can come closer to Draymond. But, you ain’t going to find another KD, Steph or Klay” – Pierce

Surprised Kyrie & LeBron have made amends?

“They did something special in Cleveland that’ll never get forgotten. Overtime, things have smoothed over and that’s what you’re seeing with these two” – Pierce

“There’s a maturity that’s happened from Kyrie’s end that has made them allow to do this. I’m not surprised by this” – Elhassan

“I’m a little surprised that it happened this quick” – Nichols

February 4, 2008 – Deron Williams (Jazz) showing off the handles and getting pass CP3 to slam it home with the one hand!

Did we underestimate D’Angelo Russell?

“Yes. You definitely did. But who knows if he had became an all-star if he stayed in LA. It’s about the right time and place for players like him” – Pierce

“He matured mentally. Sometimes, you need a shocking event in your life” – Elhassan

Among New Orleans' priorities in an Anthony Davis deal – young players/picks/cap relief – Pels are determined to get back one player w/ All-NBA potential. Do Pels see that in Ingram, Kuzma or Ball? Boston's Jayson Tatum fits mold. Can Pels pry Tatum? All internal Pels questions.

“I need a lot to make sure one of them is going to hit. Got to get more” – Elhassan