Raptors have become the NBA’s version of Boy who cried Wolf:

What a Raptors fan will ask Rachel Nichols:
“Is this year going to be different?”

Nichols says: “There’s really no way to know yet

Thanks in large part to a player who drinks a protein shake with crickets…Serge Ibaka!
Scored 25 in 24 minutes

The truth is, nobody knows if Toronto is really an NBA Finals caliber team until they get there

“I have to see these guys in the playoffs. The regular season, we can get away with these guys, being the 1 seed. We’ve seen that story before. The other guys have gotten better. I don’t know if the Toronto Raptors other guys are ready for that next step” – TMac

“The bigger threat to the Warriors for the first time in a long time is one of the top 4 teams in the East” – Elhassan
Boston, Milwaukee, Philadelphia and Toronto

“What the Clippers have done is A: They cleaned up their books (salary) in a hurry. B: They put together a roster not to tank or to be bad, but to be competitive and have a cohesive style. C: They put Doc Rivers in a position to do what he does best, which is coach” – Elhassan

“Absolutely. If only they come together” – TMac

“If he [KD] goes anywhere, the Clippers is tailored made for him to be that guy to have everybody take the asterisk, as people have put an asterisk on KD’s two championships which I don’t agree with, to really have arrived as ‘I did it on my own team not teaming up with other greats'” – TMac

December 12, 2001 – Michael Jordan with the crossover and the ankle-breaker on LaPhonso Ellis as he hits a jump shot!

“I thought he was NBA ready. He had a great feel for the game” – TMac

Slumps; Think Kyle Lowry’s slump is over?
Scored 21 points and made four threes last night vs the Clippers

The Perimeter; Give Forbes a pass since he went 5-5 from three?

Pizzazz; Do you hope this leads to more Milos (Clippers) minutes?

“He’s the greatest leader this game has ever seen if you’re talking about from the organization, a whole pie standpoint from the top-down, management, to the last player on the bench. He was just a great leader of men” – TMac

“He wants to set the table for who ever comes next [to succeed him]. He wants to put them in the best situation, not only successful immediately, but successful long-term, however long that takes” – Elhassan on how long Pop will keeping coaching the Spurs

“Pop is one of the best people that I have met in this game and that is not a small thing. We appreciate him on so many levels” – Nichols

Kawhi is NOT here to talk about Christmas 😳 (via @TomerAzarly) pic.twitter.com/fchhJBybyn

KD right about the Warriors future? (Via Chris Haynes of Yahoo! Sports)

“No. KD hasn’t been there long enough. If he hangs around for a few more years, absolutely” – TMac

“If he leaves, then he’s not getting a statue. He has got to stay. This is the 2nd greatest dynasty in the history of the Bay Area, behind Joe Montana’s 49ers” –  Elhassan

Does Rudy Gobert need to chill?

“You feel this way. Were competitors. Things get heated” – TMac

“If his goal is to get more calls, doing that won’t get him more calls” – Elhassan on Gobert’s quote

“I see a team that has come together and really enjoy playing with each other. It’s going to be interesting to see when he comes back, what they can actually do when they have a full healthy roster” – TMac

“Glass half-full: It’s all built on their defense. They have been tremendous defensively in this stretch. Glass half-empty: They’ve beaten the Suns, Wizards, Bulls, Magic” – Elhassan

December 12, 1994 – Latrell Sprewell with the strong one handed dunk on the Suns!

More likely to be a Clipper: Kawhi or KD?

McGrady: Kawhi
“He’s from the area. As a player, if you get the opportunity to go back home and play in your city, you get a chance to play with Doc Rivers, who has won a championship and has established himself as a great coach”

More confident in Thunder on road or Pelicans at home tonight?

McGrady: Thunder on road
“Russ and PG has figured it out. They are a contender in the Western Conference. They can give Golden State some problems”

Elhassan: Thunder on road
“They have been elite defensively. Dennis Schröder should have never been a starter in this league. He’s an excellent backup”

Who needs a loss more: Knicks or Cavs?

McGrady: Knicks
“I want them to get in the top 3 [of the lottery] and possibly have a chance at Zion Williamson or R.J. Barrett sweepstakes”

Elhassan, who was speaking for Cousin Proofy (@cousinproofy/Twitter; voice of the Knick Fanbase): Cavs
“They’re not getting any free agents” 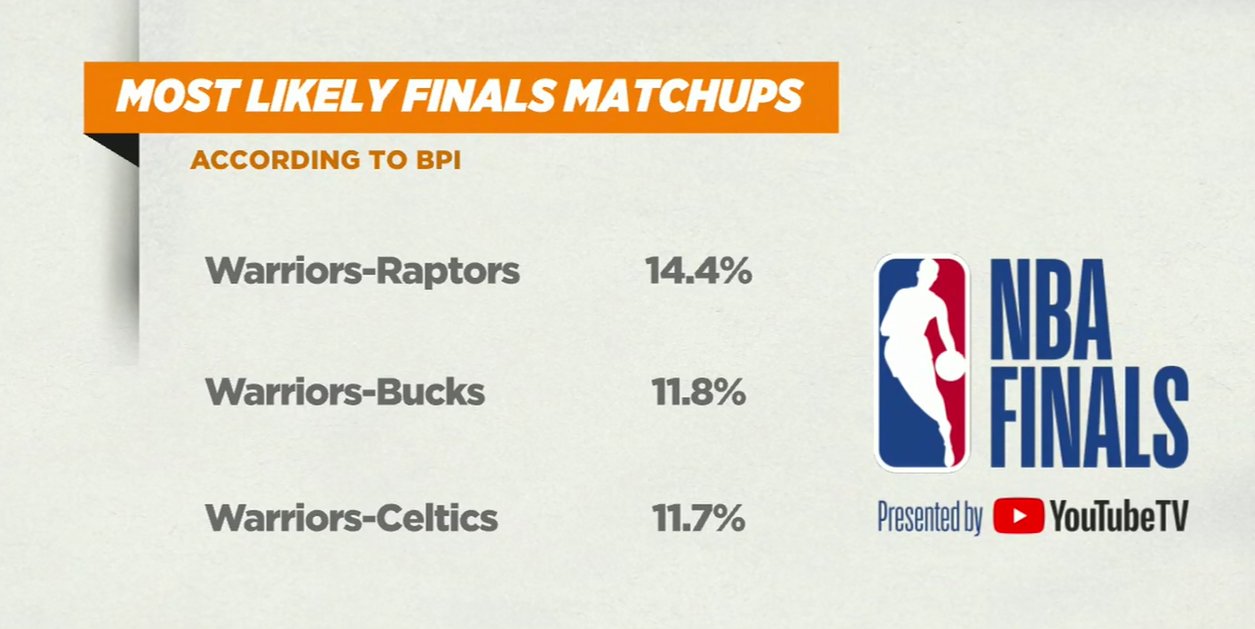 McGrady: Celtics/Warriors
“Both benches are extremely deep. Boston has the attitude that those guys will bring (Rozier, Smart, Brown). They’re not backing down. We’re going to get a lot of controversy and a lot smack-talking. I want to see rugged basketball”

Elhassan: Sixers/Warriors
“I need all the trash talk. These two guys (Embiid and Butler) are going to talk so much and Draymond. We have all the media quotes we need for years and years. It’s also a different style”

Jimmy Butler says he shot the ball once during infamous scrimmage (Via JJ Redick’s podcast; The Ringer)

“If you have a disgruntled superstar, it’s not going to make things better. You see now both teams are better off doing that trade because the Timberwolves don’t have that distraction anymore” – Elhassan

“If you look at KAT, Andrew [Wiggins] and those guys if they were on the other side, they probably don’t want to play against him” – TMac

Too early to call Doncic trade a win for Mavs?

“Nope. Luka is my favorite player to watch” – TMac