Russell Westbrook is going through a workout right now and the Thunder are waiting to see how he responds to it before determining whether to play tonight. 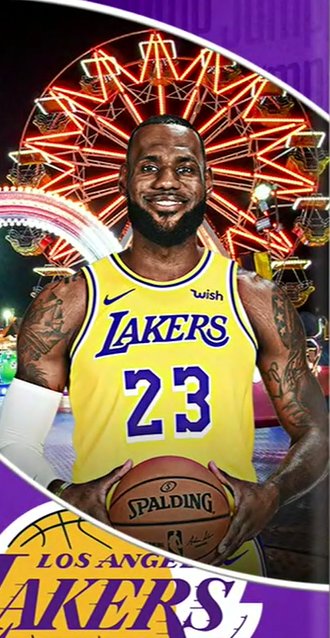 LeBron’s dunk in his Lakers debut last night is similar to his first NBA dunk back in 2003:

How concerning is Lakers 3-pt shooting? 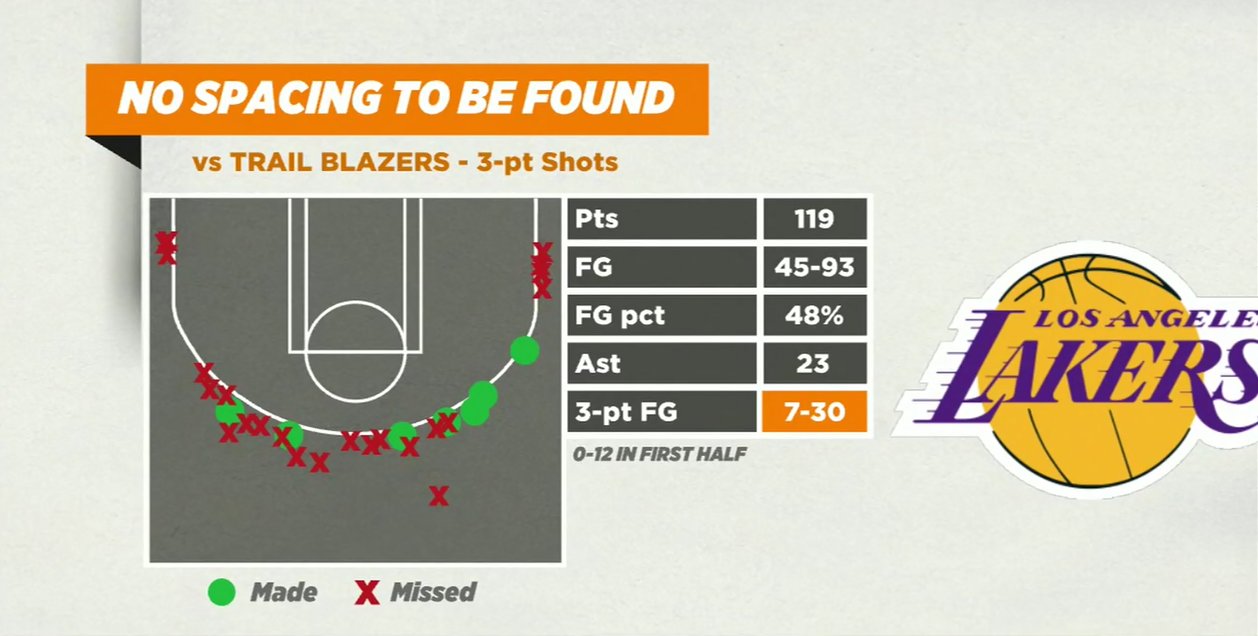 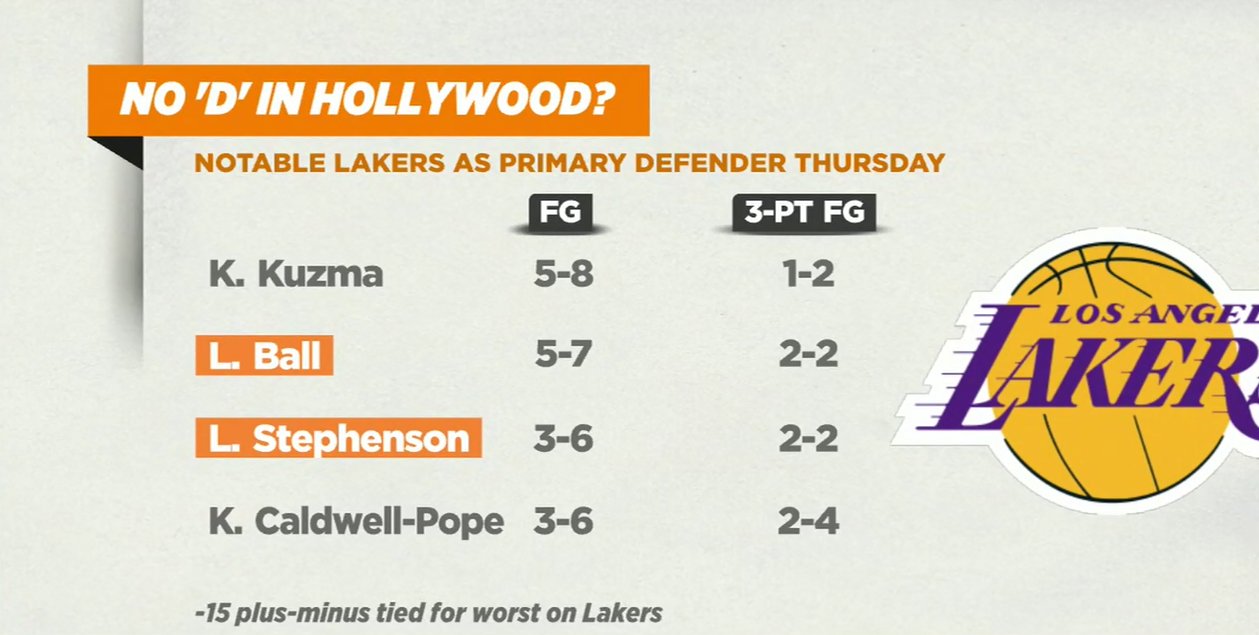 “They (Lakers Management) put together a group of guys that can beat you off the dribble, they are tough, they’re going to compete every single night. Then you got to get the shooting. They weren’t able to get the shooting this year. This is something that was going to be a concern from day one and it’s something that’s probably going to haunt them throughout the season” – Scott

“The Lakers have more to prove. This is a team that they’re looking up to, along with Golden State, that they feel they’ll probably face them somewhere down the line if they get to that 3 or 4 spot” – Scott

People Saying; Is Lowry dapping up the ghost of DeMar DeRozan?

Drops; How did Kawhi do this?

Buckets; Can Zach LaVine be an all-star this season?
Had 30 points in a loss to the Sixers

Encouragement; 76ers fans a little too excited for Markelle Fultz?

Via the Golic And Wingo show:

76ers putting too much faith in Fultz? 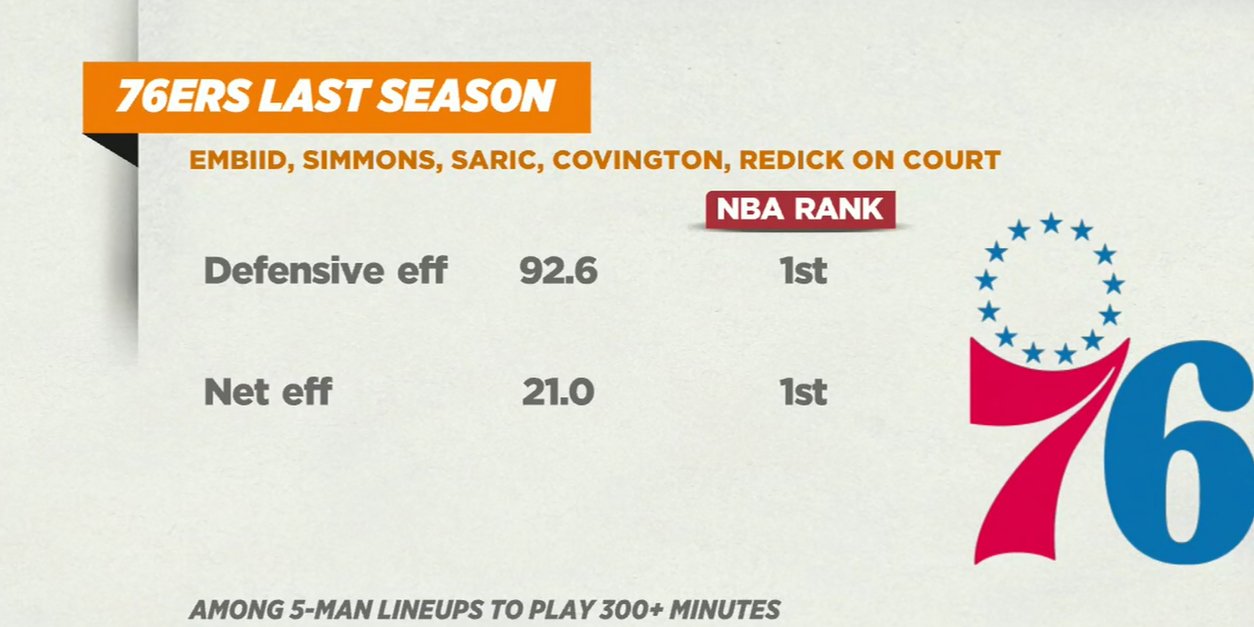 “JJ Redick in that lineup is a threat” – Scott

“The way they were playing last year, I would have kept that starting lineup together…right now” – Scott

“It’s a big time gamble. But, why mess with something that was going so well?” – Scott

“It’s worth seeing. It’s worth looking at it. I’m pessimistic about whether that lineup will actually work ” – Lowe

“Turning Carmelo Anthony into [Dennis] Schroder, who is a starting level PG in the NBA, is really going to help this OKC team. I think he was the least talked about really good acquistion of the offseason” – Woj

Kawhi on playing with Kyle Lowry:

“It’s been great. He’s been helping me out. He’s been here for the past 6-7 years. He’s making it easier for me to fit in and be comfortable by play calls and his leadership as well on the team”

“It’s going to be fine. If they win games, the team dynamic will be great” – Lowe

“Toronto has the best player in the Eastern Conference” – Woj

“This is why Masai Ujiri made this trade. He wants to win this season” – Woj

Steph at 30: Can Curry’s shooting thwart the test of time? By Baxter Holmes

Spoiler…Curry wants to play in the NBA for 16 seasons. This is his 10th season in the league!

This what we talked about!!! 🔥🔥🔥 #LABron #StriveForGreatness #LakeShow https://t.co/EcIhUjvP9p

“You talk about LeBron, the guy has done everything” – Juju

“It’s just the first game. You have a young team, they’re going to build. It takes time” – Juju

How come this wasn’t a touchdown?

Are you really the “Athlete Goat” of COD (Call of Duty)? | Response to De’Aaron [Fox] calling you out?

How long until Hayward and Kyrie look comfortable again?

Hayward on getting back into the swing of things:

“More than anything, just playing the game. I think I’ve done so many drills, so many exercises, my leg is strong. But, when you get hurt like that, you just can’t play for so long. Playing the game of basketball, playing five-on-five. They’re just so many moments that you can’t simulate in drills, in a controlled environment. And so when you just get out there in front of the fans, in front of the lights and with your teammates, like, those are moments and experiences I just need to do over again”

“When you’re out for a year with a broken leg, it’s going to take you some time to get readjusted to playing 5 on 5 basketball. It’s going to be a month or so before he starts feeling really good” – Scott

“Kyrie is going to be fine. That was like a clean surgery. People slept on how big of a deal it was that Gordon had to have a second surgery to remove the plate and the screws around his ankle because that screwed up his rehab. He was supposed to be playing 5 on 5 all summer. He’s a half-step off feeling the game” – Lowe

“I would expect them to boo him. They’re just frustrated with the franchise in general” – Lowe

“If I was a fan, I would go the opposite way: I would cheer the heck out of him. Give him a standing ovation” – Scott

The following was released by the NBA: pic.twitter.com/mv5BWLdSqz

“I don’t like it. I understand the transparency part of it. Making it kind of open to the public, it puts even more scrutiny on them (refs)” – Scott

Steve Kerr said the Jazz will be a good early road test for his team pic.twitter.com/l2Kon7lySP