Opening: “Ervin (Magic) and I had a conversation and LeBron echoed this sentiment that to try to play the Warriors in their own game is a trap. No one is going to beat them at their own game” – Rob Pelinka (Lakers GM) at a Lakers press conference

Note: First Half aired on ESPNNews

Why didn’t Melo work in OKC? 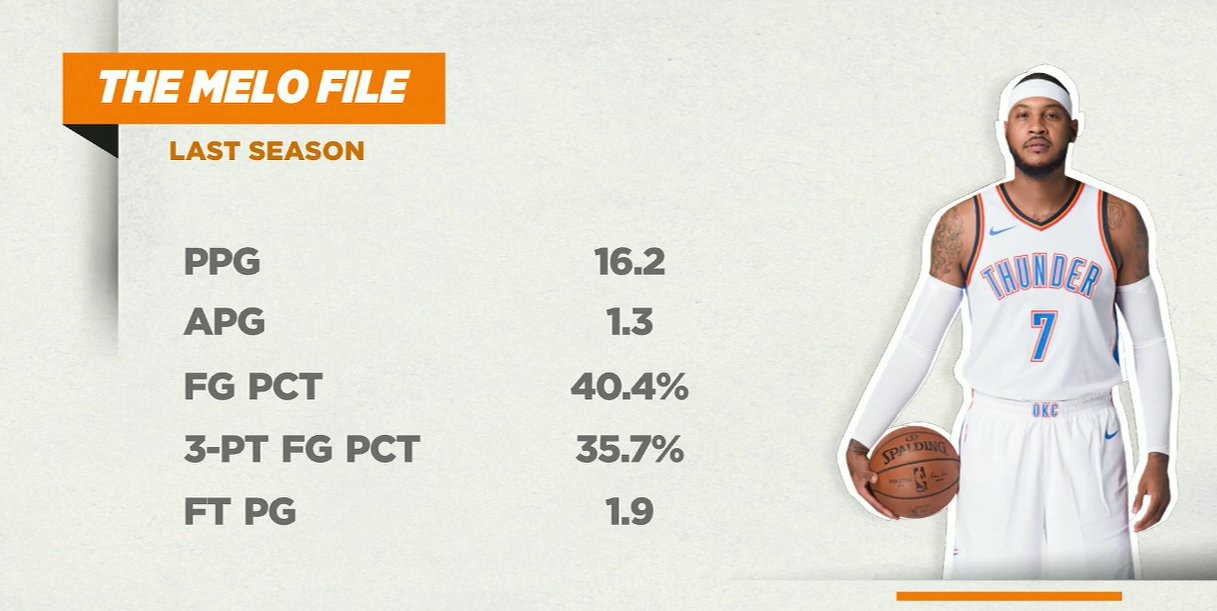 “When they made the deal for Carmelo Anthony last year, the Thunder kind of viewed it as a two-year thing” – Young

“When it’s a $100 million dollars that you can save for a guy that really didn’t necessarily fit at all it really, at that point becomes a no-brainer” – Young

“You owe it to your team, as an owner, to make the financial investment” – Elhassan

Expectations for Thunder next season? 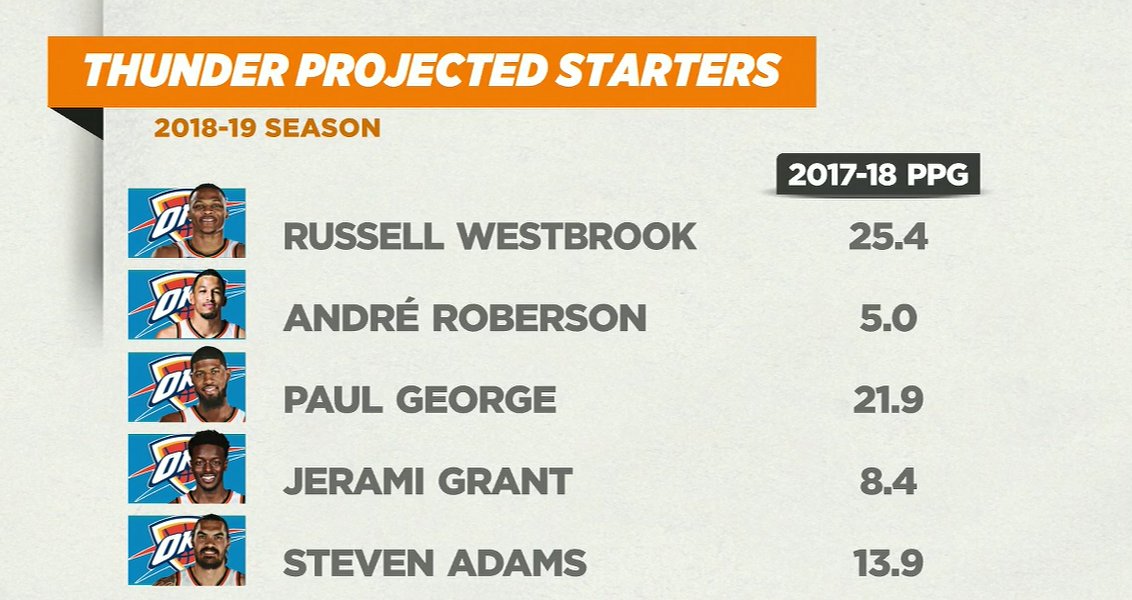 “They could be better, especially with (Andre) Roberson coming back. But it’s still the Warriors, Rockets and Jazz” – Elhassan

“We wanted high IQ basketball players. We wanted versatility. We wanted depth in our roster. We wanted to be able to play fast and we wanted players that had a toughness about them. As we completed our signings yesterday, we look at this roster of 14 players and were incredibly proud that it represents those things” – Rob Pelinka (Lakers GM) at a Lakers press conference

“Overall, by in large, he’s (Rob Pelinka) saying ‘We want to be flexible'” – Elhassan

“They did what they did with the knowledge that this isn’t a team that’s going to be competing for a championship for them in years to come. This is just something to get us off the ground to start LeBron’s tenure with the Lakers” – Elhassan

“It means not extending yourself financially” – Elhassan

“You’re not going to beat them (Warriors) in a beauty pageant. You got to turn the beauty pageant into a boxing match” – Elhassan

“They’ve got some time to figure out what works” – Young

Attendance; Did people really think LeBron would show up to Blaze Pizza?
Yesterday, LeBron hinted that he might, maybe, show up at a Blaze Pizza in Culver City (He owns part of that pizza chain). People showed up, hoping he would want that pizza party he tweeted about:

So LeBron James really is going to be at a pizza party in Culver City. The line goes around the block and then some. pic.twitter.com/3Wg7q4M93i

But…he ended up staying home in his pool!
Via mrs_savannahrj/IG aka Mrs. LeBron James (Savannah)

Hope; Is Kevin Knox the hero New York City needs?
Last night, he posted 29 points and 9 rebounds vs the Lakers

Boxing out; Lonnie Walker a good replacement for Kyle Anderson?
He came out of nowhere for a putback slam! 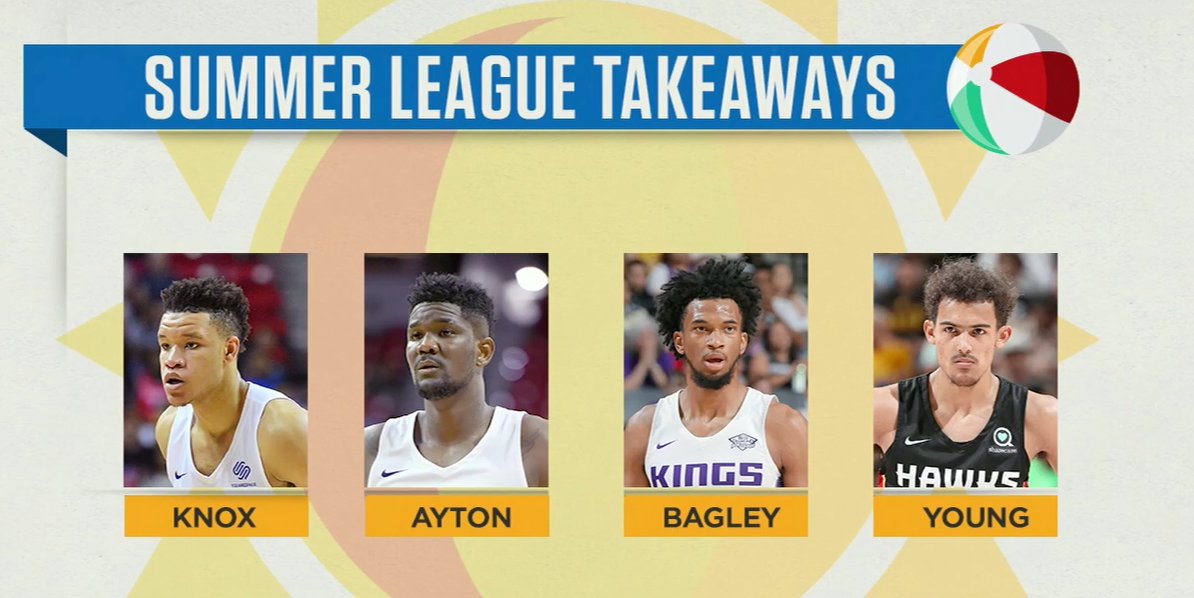 “The guy can ball. Give him time. He is the real deal” – Young

How concerning is Marvin Bagley’s injury?

“This is Summer League protocol 101. Sit him out. Don’t risk anything” – Elhassan

Deandre Ayton living up to the hype? 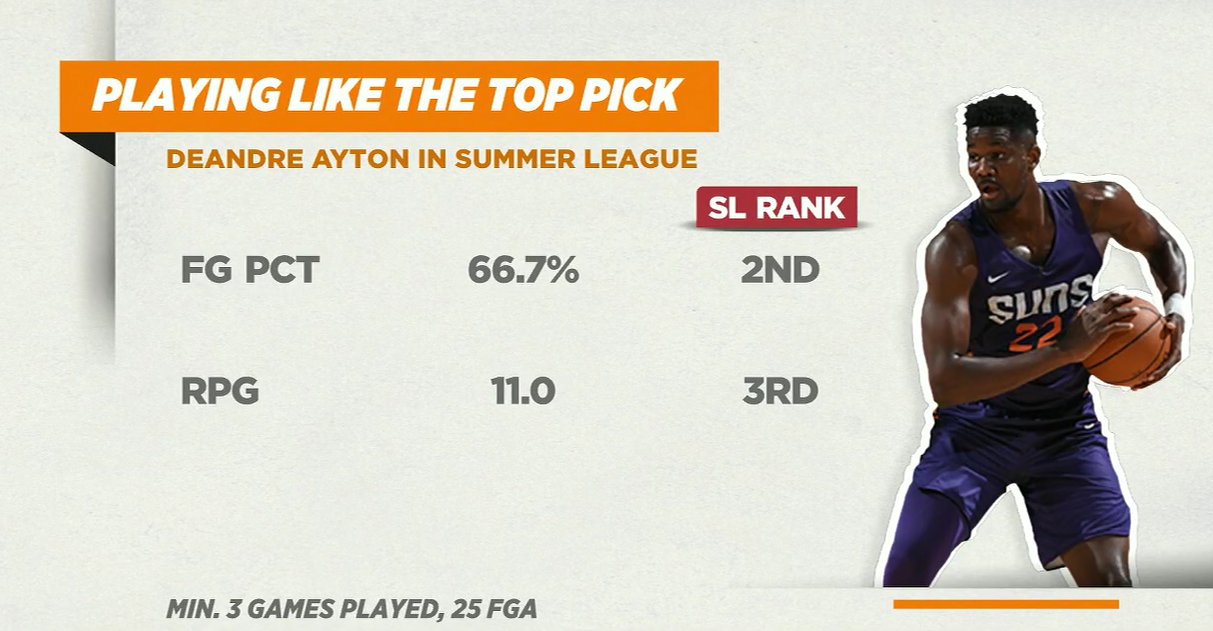 Note: Second Half aired on ESPN 2

Flashback to Dwight Howard’s appearance on The Jump (June 14) talking about the struggles he faced coming into the NBA out of high school:

Silver on age limit: “Ready to make that change”

“It’s up to the player to handle their business” – Young

Does NBA have issues with parity?

“Every generation, every decade, you have teams like the Warriors” – Pierce

“Of course there’s a parity issue. It’s been this way for a long time” – Young

“The NBA is always going to have a parity issue” – Young

“Some of these dynasty teams, it’s what people love about the NBA. It’s become must-see TV” – Nichols

Smart for NBA to consider moving up free agency?

“It definitely should. What’s the NBA about: making money, making good television” – Young

“This is good TV. We need to take advantage of this” – Young

“I think it would be great for the league. It’s something you can promote” – Pierce

“It all depends on the asking price. You have to go for it, regardless if he’s injured or not” – Pierce

How long until Lakers contend with Warriors?

“Listen, the road to an NBA championship has to go through the team that won last year. And we all know the guys up north have a special group. But, one of the ways to attack what they have is with defensive toughness. I think we saw that in the Houston series” – Rob Pelinka (Lakers GM) at a Lakers press conference

“They’re pretty far apart. Not this year, but maybe next year” – Pierce

Karl-Anthony Towns and the Wolves discussing a max extension; Per The Athletic:

“They should have did it yesterday. There’s nothing to discuss. Give him his money” – Pierce